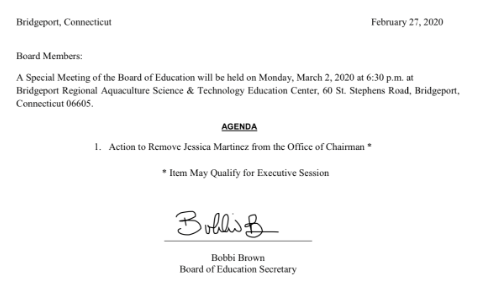 The Board of Education will meet Monday night in special session to vote on one agenda item: “Action to Remove Jessica Martinez from the Office of Chairman.”

School board members cite several factors for this vote: suspicion of drug use (which she denies), violent altercations with her “ex-boyfriend,” leading to arrest (she claims she’s a victim), lack of protocol for running meetings, flaccid support for more school funding from the state, et al.

The majority that voted for her in December has had a major change of opinion, so it seems. Martinez claims it’s all political, whatever that means. Wasn’t it political that won her the chairmanship?

Such is the drama on the Board of Education overseeing the largest school district in the state. If she’s removed as chair the nine-member board will select a replacement. She will remain an elected member up for reelection next year.