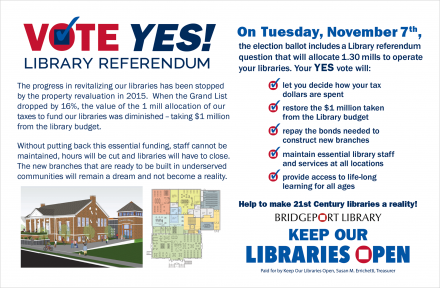 In 2009 city voters, against the wishes of the political establishment, voted to levy one mil to fund city libraries, an initiative pushed by the city’s Library Board. The referendum question passed 2683 to 1455. Library supporters declare that the 2015 revaluation dropped the value of 1 mil that now requires 1.3 mils to finance the system. State Senators Marilyn Moore and Ed Gomes have lent their support for the Nov. 7 ballot question.

The Facebook page Keep Our Libraries Open urges voters to support the Nov. 7 ballot question “Shall a one thirty hundredths (1.30) mill tax be levied to operate a free public library and reading room?”

City bean counters say approval of the measure could impact other services. The library budget adopted by the City Council for the current fiscal year is $5,713,859. Two years ago it was $6,829,089. So essentially the library vote question asks for $1 million more to operate.

In a statement issued by library supporters, “This referendum will let the voters decide where their taxes are spent. If a majority vote Yes with the Senators, it will put back funds taken away from the Library so that the main library and its four branches: Black Rock, Newfield, North, and Old Mill Green may continue current hours and programs as well as open the new facilities that are ready for construction to replace the leased spaces at the Old Mill Green branch and at Newfield that is slated for demolition.”

“Our libraries are critical to the quality of life of all Bridgeport residents,” says Moore. “I urge you on November 7th to vote YES to keep our libraries funded and open.”

The Black Rock and North End branches fall within Moore’s District. The main Downtown library and East Side and East End branches sit in Gomes’ district.

“Libraries are a safe haven for our children and a learning center for everyone of all ages,” says Gomes. “Stand with me and vote Yes to keep our libraries open.”

State law allows voters to approve a levy to finance local libraries, language that Library Board President Jim O’Donnell and Sylvester Salcedo, both lawyers, took to court, following push back by then Mayor Bill Finch. Salcedo was then a board member.

“We truly appreciate their continued support for the essential services our libraries provide,” says O’Donnell referencing support from the state senators. “Our senators and their colleagues realize how our free public libraries transform lives with access to lifelong learning for all ages. Because the Grand List decreased so much with the revaluation, more than a million dollars was taken from the Library budget. Now all the progress the Library Board has made to open more hours, acquire the new sites and design the new facilities is in jeopardy. The leadership of our Senators to pass this referendum helps fix the problem caused by revaluation so we can build the new branches in neighborhoods that need them the most and keep all our libraries open.”

All this raises a question: if the vote fails, does the financing of the library system default back to 1 mil? Or the way prior to 2009 when it was treated like other city departments?