High-profile pols generally don’t avail themselves to local, insider political skirmishes, but they will sometimes step up for neighborhood leaders who’ve been there for them early and often. That’s what Congressman Jim Himes has done for Danny Roach, neighborhood bar owner, police commissioner, mayoral appointee and district leader whose nine-member Democratic Town Committee slate faces a challenge March 6th in the 130th District that covers Black Rock and a portion of the West End.

Closer to home in what is retail as retail politicking can get, State Senator Marilyn Moore is supporting the insurgent slate while State Rep. Steve Stafstrom is backing Roach’s slate.

“Danny Roach is a good friend whose strong support I could always rely on during tough campaigns,” says Himes in a statement on behalf of Roach. “His longstanding commitment to the Democratic Party in Black Rock is admirable and much appreciated.”

These low-turnout district battles are all about identifying friends and dragging them out. Part of the process includes immunization from attacks leveraging people respected in the neighborhood. Whose opinion matters to you?

“If it wasn’t for folks like commissioner Roach who supported us we would never have had the ability to reduce crime as significantly as was done during my time in charge of West command,” says McCarthy. “He always made time to speak with me regarding problems or concerns in the neighborhood.” 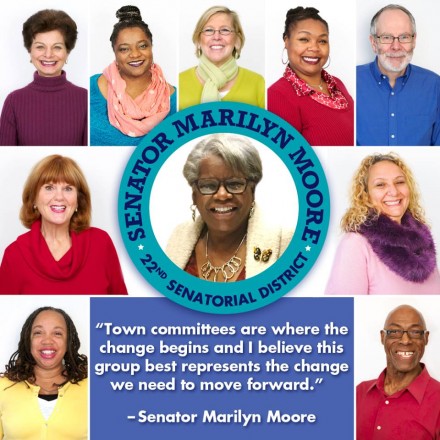 Moore, see above, is featured, in a piece on behalf of the challengers.

On March 6th, 6 of 10 town committee districts will forge primaries. Bridgeport’s 90-member DTC endorses candidates for public office and selects party officers. These battles are not winner take all. Electors in the respective districts can choose from any 9 among 18 candidates. So when polls close primary night a mixed bag of slate winners could occur.

Absentee ballots, as well, become a premium and both slates in the 130th District are working them. As of late last week about 170 absentee ballots have been requested in that district. The district has two voting precincts, Black Rock School and Aquaculture School.

District candidates follow listed by Slate B and C. No Slate A because no party endorsements in this process. Democratic electors in the respective districts are eligible to vote.