Readers were both fascinated and speechless in April, and it became the royal flush of stories that went national. Maria Pereira and Ernie Newton now sit just a few feet apart on the City Council. Hopefully, no direct pissing contests any time soon. Watch out for the spray zone. We look back:

In one corner school board member Pereira, the self-styled piranha of city politics; in the other City Newton, the self-proclaimed Moses of his people, who had substance abuse issues decades ago, but says he’s been clean and sober since. Both have accused each other of overindulgence of a foreign substance in one form or another.

We tease on OIB about the medical condition of some posters, but in April Pereira issued a drug-test challenge to Newton who responded game on. She even paid for the test.

Newton walked into a North End lab testing facility, peed into a sterile container and had his results presto. He came up negative for marijuana, cocaine, amphetamine, methamphetamine, opiates, oxycodone and others, according to the result certificate he provided OIB.

Pereira had her test done the day after. She produced paperwork showing results negative, as well.

How did this happen? The two political warriors have gone at it for quite some time in edgy comments section barbs over a variety of issues. Pereira threw down a challenge. Their exchange follows.

Ernie,
You are just all over the place with wild accusations you will never be able to substantiate.

Our BPD officers are carrying around and administering epinephrine???

I’ll tell you what, Ernie. I will gladly pay for both you and I to take a drug test with the understanding the results, whatever they may be, will be released to OIB.

I have absolutely nothing to worry about. Will you agree to take a drug test I pay for on the condition the results are released to OIB?

I will await your answer.

Maria,
Name the TIME and PLACE we Both can take a DRUG T$EST or is that your MEDS talking!
Bring it on MARIA I’M WAIT … Maria I’M WAITINGGGGGGGGGGG. PUT UP or shout the F- – – UP! DATE TIME AND PLACE. And LENNIE I want YOU TO POST ON OIB.

Once you agreed, I had to research local drug testing locations, type of tests, costs, payment, protocols and more.

We will be taking our 10 Panel Drug Tests as follows:

We each need to bring identification and need to sign a release that the results will be emailed to LennieGrimaldi@OnlyinBridgeport.com

My payment information is on file with Erica, Administrative Manager. Just let the employee who checks you in know that the test is being paid for by Maria Pereira and Erica has the information.

I am asking that we take the test by 5:00 PM tomorrow so that it narrows any opportunity to take anything that would hinder the detection of substances in our urine.

Maria,
News Flash
I sitting at Urgent care I was tested
For A Marijuana Cocaine Amphetamine Methamphetamine Opiates Oxycodone PCP Barbiturates. Benzodiazepines and Methadone.
Final Result Disposition all came back NEGATIVE 👎
Maria I will deal with you. Lennie I will take a picture and send it to your phone.

Ernie,
You were supposed to sign a release to have the results emailed directly to Lennie Grimaldi. What do you think you are doing? You weren’t supposed to see the results at all. You could be sending a picture of anything???

You are just unbelievable. 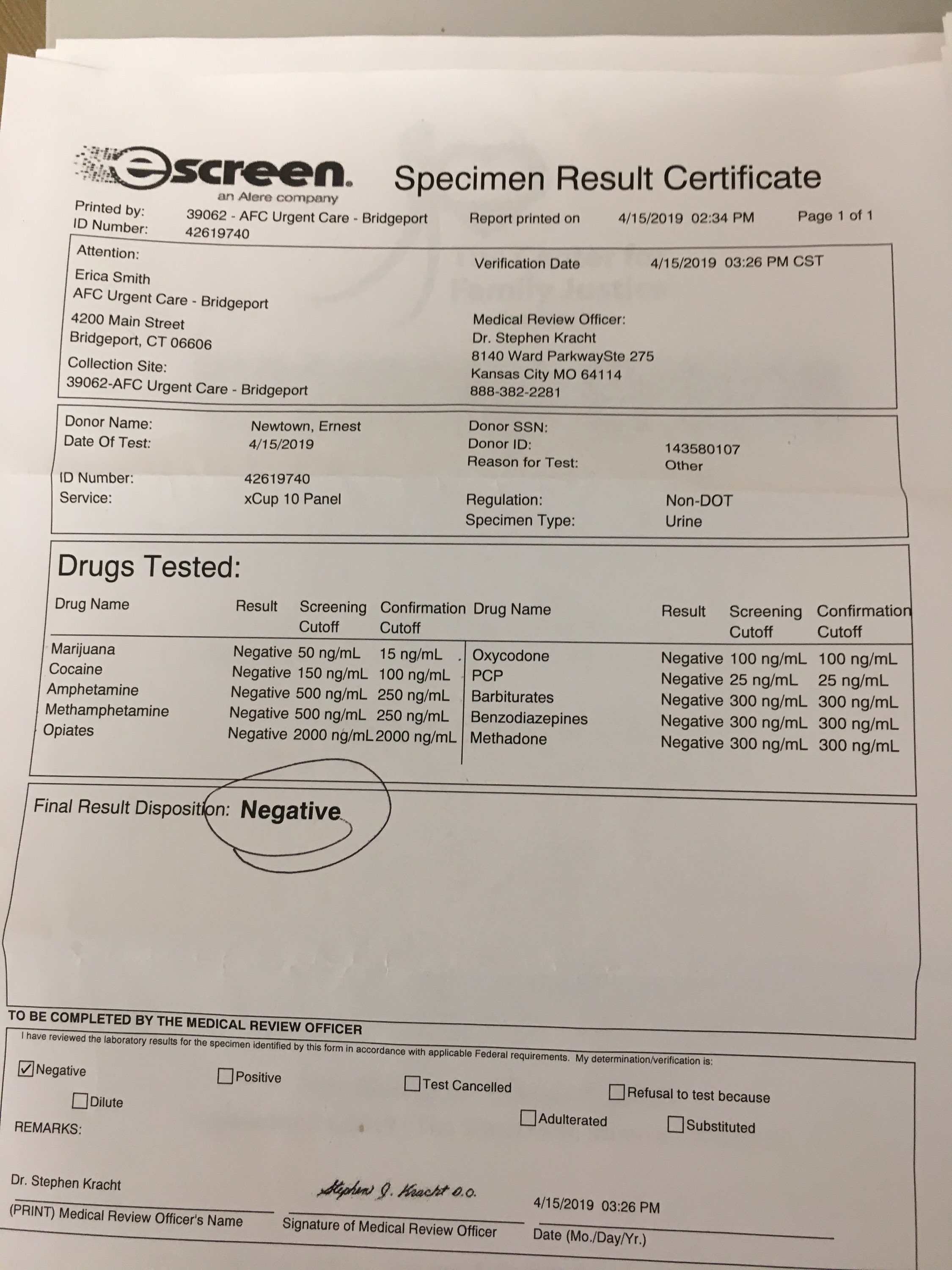 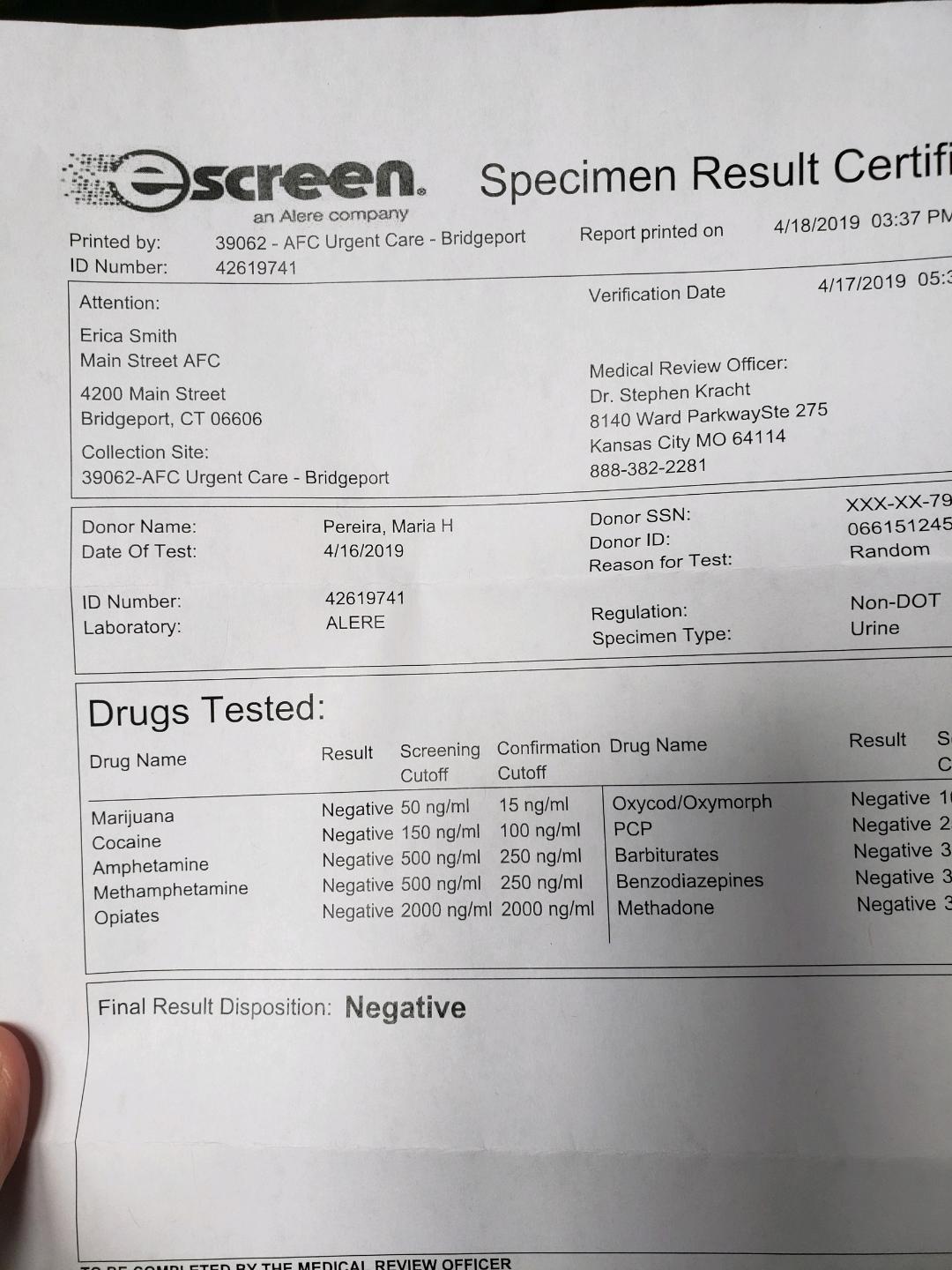 In Bridgeport, the showdown took place voluntarily after Newton and Pereira, both Democrats, began sniping at each other over a news item about budget figures that had been posted to Only In Bridgeport, a widely read site dedicated to discussing the city’s often-colorful politics.

“Please remember to take your meds,” Newton, the city councilman, wrote to Pereira on April 13.

Pereira, the school board member, hit back. “Ernie, I promise I will continue to take any and all prescribed medicine,” she replied. “In turn, please ensure you take anything you need that may have to be swallowed, snorted, inhaled, or injected.”

“Stop taking drugs. It is killing the few remaining brain cells you have left,” Pereira wrote.

Two days later, Newton appeared to accuse Pereira of overdosing on medication and referred to her as a “psycho” in the comments.

That prompted Pereira to challenge Newton to take a drug test that she would pay for, so long as the results were posted to the blog, Only in Bridgeport.

Newton accepted and took the drug test that same day. Pereira took her drug test the day after Newton and provided her paperwork to Only in Bridgeport three days later.

The two tested negative for the same 10 substances, including marijuana, cocaine and opiates, according to the results published on the blog and provided to CNN.

Some political feuds end with an election. This one ended with a urine test.

Two local lawmakers in the Connecticut city of Bridgeport spent the last week hurling insults and accusations of drug use at each other–before deciding to settle the matter by peeing in a cup for a drug test.

The nasty–in so many ways–public feud ended on Monday after the results of the tests for Bridgeport City Councilman Ernest Newton and Board of Education member Maria Pereira were revealed. It turns out that both lawmakers tested negative for 10 substances–marijuana, cocaine, amphetamine, methamphetamine, opiates, oxycodone, PCP, barbiturates, benzodiazepine and methadone–according to The Connecticut Post.