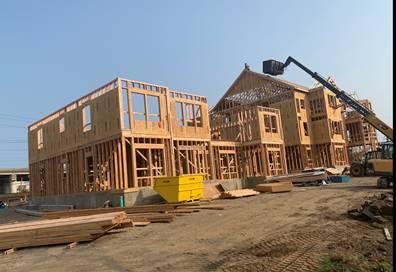 Mayor Ganim joins Office of Planning and Economic Development, Park City Community members, JHM Development and site contractors to announce that construction has begun on the Windward Commons Development at the site of the former Marina Village public housing complex.

Redefining the entryway to the City’s South End, this twenty-seven-million-dollar project features a new 7,000 square foot Southwest Community Health Center, as well as 54 units of mixed-income housing. Built to neighborhood scale, the project includes a 4-story mixed-use building at the corner of Park and Railroad Avenue, as well as townhouse style apartments along Johnson Street.

Windward Commons is the first phase of a broader redevelopment plan providing for more private investment in affordable mixed-income housing at the former Marina Village site. It is being built alongside the State of Connecticut’s Resilient Bridgeport project, which will create an adjacent public green space that will be designed to absorb rain run-off and will include a pumping system to provide greater flood protection for the area.

Mayor Ganim stated, “It’s exciting to see this project moving vertical, it’s a sign that things are happening and great news for the residents of Bridgeport’s South End. High quality affordable housing is a priority as is the need for progress even during uncertain times. The development, along with the green resilient infrastructure, will enhance the neighborhood and quality of life.”