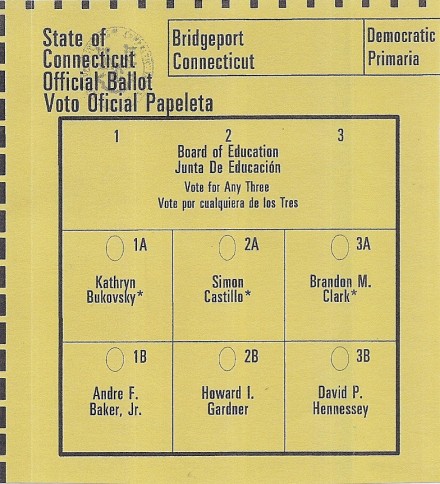 More than 700 absentee ballots have been returned to the Town Clerk’s Office for Tuesday’s Democratic primary involving citywide school board seats and four City Council districts. It’s likely more than 10 percent of the overall vote will come via absentee ballot. The size of the absentee ballot spread could determine what school board candidates emerge from the primary to move on to the November general election.

By Tuesday overall votes from absentee ballots will approach and may exceed 800. If the endorsed slate wins the absentee ballot count two to one, that places a premium on the challenge slate to win the machine count by several hundred votes for its three candidates in what is expected to be a light turnout. Based on recent voter history for local primaries, most political operatives project the turnout in the 12 to 15 percentage range.

Democratic primary electors can vote for no more than three school board candidates from the two lines. The top three vote producers among the six candidates move on to the general election.

The school board primary is a major campaign test for political supporters of Mayor Bill Finch trying to stave off a challenge that is well financed by education interests and a ground operation led by the union representing teachers, the Bridgeport Education Association, as well as Connecticut Working Families Party and seasoned political operatives aligned with the opposition slate. Both sides are also receiving independent expenditures from education advocacy groups.

In the West Side 132nd District, Bob Halstead and Trish Swain will face incumbents John Olson and Evette Brantley.

In the East Side 136th District, Richard DeJesus and Alfredo Castillo are opposing incumbents Carlos Silva and Angel DePara.

In the East Side 137th District, incumbent Lydia Martinez and Milta Feliciano will take on endorsed ex-councilwoman Maria Valle running with Aidee Nieves.