More than a year ago Mohegan Sun made a big P/R splash, announcing an exclusive three-year partnership agreement with the city-owned Webster Bank Arena involving concerts, sporting events and sponsorships. It was a spin to gain a footprint in the city amidst a battle between Connecticut’s two tribal nations and MGM over a proposal for a commercial gaming destination in Bridgeport, a face-off that continues in the legislative session.

What’s happened since that announcement promise by Mohegan Sun? Crickets. 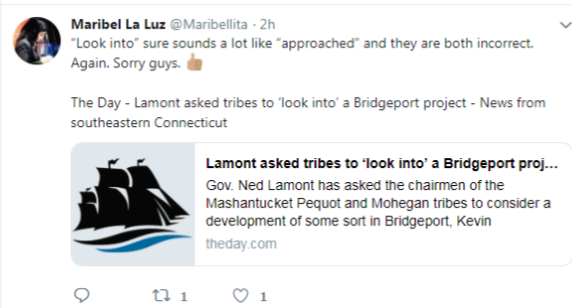 So what’s the Tribes’ angle?

“Yes, the Governor did actually reach out to us and say; ‘hey, you what? we think there’s an opportunity there and we think that we’d like to work with our current partners and would you be interested?’ And we said yes,” says Chairman Butler. Chairman Brown adding, “We are pleased to know that the Governor sees the value in the tribes being part of a discussion to do that development.”