From the Barnum Festival: www.barnumfestival.com

The six newest members of the 2013 Barnum Festival Royal Family were selected Sunday, May 5th at the Holiday Inn in Bridgeport. The royal court will play a key role in the 65th Barnum Festival, the annual salute to the life and achievements of P.T. Barnum, world famous entrepreneur and former mayor of Bridgeport.

The event was sponsored by The Bridgeport Hospital Foundation. The Ernest and Joan Trefz Foundation will provide scholarships to the Royal Court. This year’s king is Shyheim Snead, a student at Kolbe Cathedral in Bridgeport. Maggie Bodington, a student at Stratford High School, was crowned queen.

Sergio Cruz, of Bridgeport, a student at Fairfield Prep, and Kyle Thibodeau, a student at Masuk High School in Monroe, were named princes. Brianna Feola, a student at Derby High School, and Dajsha Perrin, of Bridgeport, a student at Platt Tech in Milford, were named princesses. The new royal family was chosen from a pool of 30 applicants from high schools in greater Bridgeport. “P.T. Barnum inspired generations of young people to the call of civic duty, entrepreneurship and helping neighbors,” says 2013 Barnum Festival Ringmaster John F. Stafstrom, Jr. partner in the Bridgeport office of Pullman & Comley, and longtime Bridgeport resident. “It’s uplifting to participate in the bright future of students that reflect the diversity of the entire Barnum Festival region. We celebrate Barnum’s legacy and the promise of our students.” 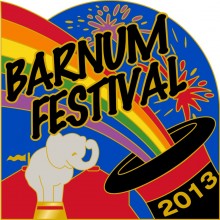 The contestants were interviewed by a panel of judges who chose the winners based on their records of academic leadership, enthusiasm and social skills. The judges were Fred Hall, vice president of Bridgeport & Port Jefferson Steamboat Company, Richard Dreyer, Bridgeport Hospital Employee of the year, Carmen Colon, executive director of Alpha Community Services, YMCA and Deborah Thomas-Sims, representing the City of Bridgeport.

The King and Queen competition includes the solicitation of schools in the Bridgeport region to provide one candidate for King and one candidate for Queen. Candidates must be from the Junior class (11th grade), scholastically in the upper 5th of their class, demonstrate solid leadership abilities, and develop alliances necessary to achieve goals, as well as support fellow students in their academic, non-academic, and/or social endeavors. The judges consider the participation of the candidate in their own school clubs and organizations as well as their participation in local community organizations. The extracurricular activities of the candidates are also considered, such as musical groups (bands, orchestra, choral groups, etc.) sports activities (teams, intramural, etc.) and other groups.

About The Barnum Festival

The Barnum Festival was established in 1948 to celebrate the life and times of P.T. Barnum and to commemorate the history of Bridgeport. The Barnum Festival is dedicated to providing exciting family entertainment which enriches the community, embraces diversity and celebrates life. Events produced through the passion of our volunteers brings to the community The Jenny Lind Competition & Concert, Champions on Parade, The Wing Ding Parade for Children, The “Got Talent” Vocal Competition, a spectacular fireworks display at Seaside Park and The Great Street Parade. For more information, please visit www.barnumfestival.com or call 203-367-8495.