OIB friend Denis O’Malley, chairman of the port authority board, disclosed today that Riccio has agreed to a six-month severance of approximately $58,000. Under the terms of Riccio’s employment contract he was scheduled to be paid until October 2010. He earned roughly $119k yearly. O’Malley statement:

Riccio had come under fire after port authority lobbyist Jay Malcynsky spliced language onto a bill in the last days of the regular legislative session that gave the state Department of Transportation final say over the dissolution of the port authority.

This threw many City Council members into a fit over loss of home rule and, as a result, the city’s legislative body voted to disband the port authority before a gubernatorial signature could sign the state measure into law. The local legislation, however, has not been signed by Mayor Bill Finch who has reservations about dissolving the quasi city agency. Riccio’s departure could sway the mayor to veto the city ordinance and influence appointment of a new executive director, especially if legislators in Hartford move forward with reversing the state legislation.

The five-member port authority board has moved in earnest to keep the agency afloat. And this latest move leading to Riccio’s departure is an effort to persuade city officials to repair rather than dissolve the port authority. City Economic Development director Don Eversley is also a member of the board.

Riccio was represented in negotiations by former Mayor Tom Bucci, an experienced labor attorney. Had Riccio been terminated for cause, for not seeking board approval regarding the state legislation, a nasty legal battle could have erupted with the port authority paying out much more than $58k.

The settlement with Riccio also saves tons in legal costs. Under the terms of the general agreement signed by Riccio he’ll be out as executive director on Tuesday and he’ll receive his negotiated severance by the end of the week.

Prodded by Bob from BePo, we’re launching Clean It Up!, a feature from our days at the Bridgeport Light, a community weekly paper that took on illegal dumpers, filthy establishments and yes even a few that featured the word reputed in front of their name.

Residents on the East Side have been complaining about Club SIXX at 2536 East Main Street, a dance bar with ear-splitting music and patrons that spill out into the street.

It’s located in the former Fitzwilly’s. For you nostalgia buffs, the old Fairway. The club also has some issues pending before the state Liquor Control Division, according to website minutes of the state Department of Consumer Protection.

Andy Fardy, a candidate for City Council in the 138thCity Council District, (along with other residents) is trying to get the restaurant to clean up its act. As Fardy points out:

“This restaurant has applied for live entertainment and such through the Zoning Board of Appeals. Residents responded and obtained petition signatures only to have the meeting postponed because the ZBA application was unclear. This is the old postpone the meeting enough times and the opposition will stop showing up. The petitioner is represented by (land use attorney) Ray Rizio.

“Ann  Barney [Fardy’s council running mate] and I got involved and I contacted Blight Officer Dennis Scinto who responded immediately. Mr. Scinto took photos and made a few telephone calls and the next day the dumpster was not only emptied it was removed from the premises. The remaining trash was also removed.”

The club operator apparently has a short memory and on Sunday Fardy spotted more stray trash outside the premises. Fardy snapped these images and shared them with OIB. So here’s what we say to Club SIXX … 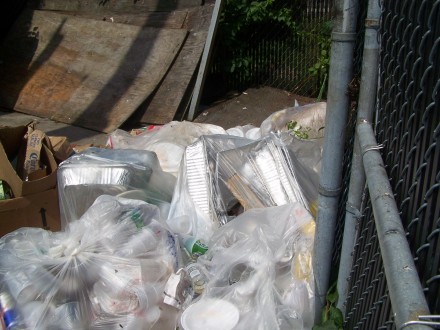 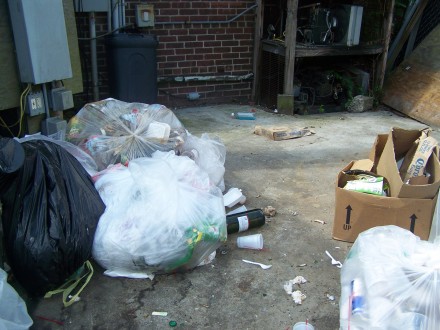 News release from The Gallery at Black Rock

The Gallery at black Rock is pleased to present Directional Prada, Peter Konsterlie’s one-man show opening July 24,2009. Konsterlie’s work in directional Prada explores the themes of branding and its relevance to contemporary artists and how they relate to the need for artists to have a “brand” to continue doing what they love. He seeks to delve into what a “Konsterlie painting” is about.

Konsterlie’s work blends figurative representational line drawing, with abstracted patterns and visual signposts. The power of pattern and repeated design are hallmarks of the Konsterlie painting. He believes strongly in the visual power of repeated drips pattern. Gestural strokes of paint and repeated create pattern and texture Directional symbols draw the eye to points of imagination, significant and not.

In several paintings Peter uses anatomical figures and images from popular culture to create a dialogue on the subject of mortality and the medical experience.

The show will have an opening reception on July 24th from 6 pm until 9 pm
The Show runs through August 21st 2009.