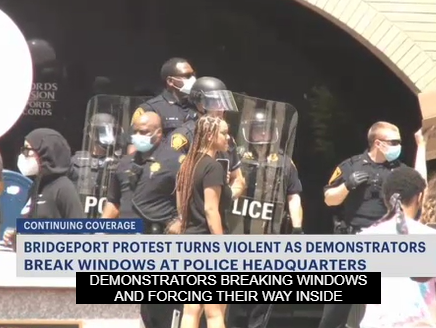 Around noon today (Saturday) an organized and peaceful demonstration took place at McLevy Green. After some time at McLevy Green the organized protest was joined by others and moved to the Bridgeport Police Department on Congress Street.

Bridgeport officers maintained the front of the office building and exhibited restraint as the protestors chanted, and then became agitated and knocked down the barriers to the site and gained access by force to the exterior doors of BPD HQ. Officers did not engage protesters and returned to the building prior to the breach.

The protestors attempting to gain full access into the BPD HQ were asked to go back outside. The protestors refused that order, and were again asked to peacefully go back outside. Protesters forcefully moved further into the facility when BPD deployed pepper spray to deter breach into headquarters. The use of this tactic was announced twice with the request for protesters to exit before being disseminated.

There were no serious injuries caused by the spray and the individuals left the facility to return to the demonstration outside. Soon thereafter, the remaining group began to move to various locations and ultimately proceeded to the on ramp of State Route 8 (RT 25). At this point the demonstration was overseen by CT State Police. After an extended duration a large group of protestors began to exit Route 8 and proceeded back to McLevy Green to finalize their protest. A few remaining protestors stayed on scene and made their way back to Route 8. The Connecticut State Police remain in command of State Route 8 operations.

We commend our Bridgeport Community for hosting a peaceful and meaningful protest today. Feelings of frustration & heartache are validated by what we saw, as to the need for change.

We are united on these matters.

It is unfortunate that some came to interrupt this show of community solidarity.