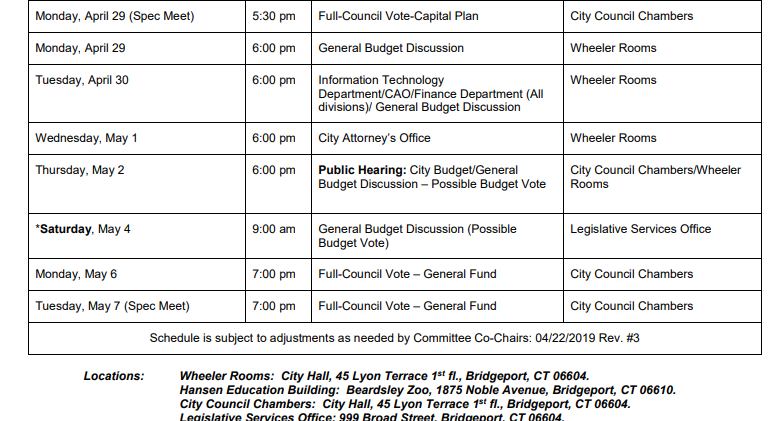 Late this week the City Council’s 7-member Budget and Appropriations Committee will make alterations and vote on Mayor Joe Ganim’s $565 million proposed budget see here that calls for a modest tax cut in an election year.

Lots of questions. Will they add money to the flat-funded education budget in lieu of a tax cut? Will they mess with any other departments such as public safety? If they reduce or eliminate Ganim’s proposed tax cut will Ganim veto it?

The full council is scheduled to vote on the capital plan–expenditures for goodies such as infrastructure projects–Monday, 5:30 pm in chambers, 45 Lyon Terrace. See schedule above.

The final public hearing on the budget will be Thursday 6 pm. By the weekend the budget committee will vote the spending plan to the full council for a vote no later that May 7. Once that occurs the mayor has up to two weeks to issue a veto on the council’s adopted budget. May 28 is the last day for the council to vote on the mayor’s veto.

The mil rate will be set early June for the budget year starting July 1.

Ganim enjoys strong veto power so if the council alters Ganim’s proposed tax cut far beyond what he’s promised taxpayers he’ll likely veto it. For instance, in a recent letter sent citywide to constituents Ganim declares “The budget that I presented successfully includes a decrease in taxes, for the first time in twelve years.”

You think he’s gonna come off that pledge? The tax cut average is about $150 per household. The overall cost of the tax cut is about $4.5 million. Sentiment exists with some council members to add part or all of that to school spending. Ganim won’t care if the council adds more money for schools provided they don’t mess with his cut. That means they’d have to find some savings elsewhere. The largest pot of dough to leverage, however, is from the tax cut.

Still to be heard from in this budget process Ganim’s reelection rivals State Senator Marilyn Moore and State Representative Charlie Stallworth. They’ve been relatively circumspect weighing in on Ganim’s budget document. That could change, if so it sets up a potential municipal versus state legislative dichotomy. If they criticize Ganim for shortchanging schools, Ganim will counter what have you done to lobby more education dollars in your elected capacities?

To Ganim’s way of thinking taxes, public safety and development rise above education as core issues, something that gnaws at school advocates.

Opponents can pick apart other parts of the proposed budget to resonate with voters, but given the financial outcry from school advocates this could be a flashpoint debate this election cycle.