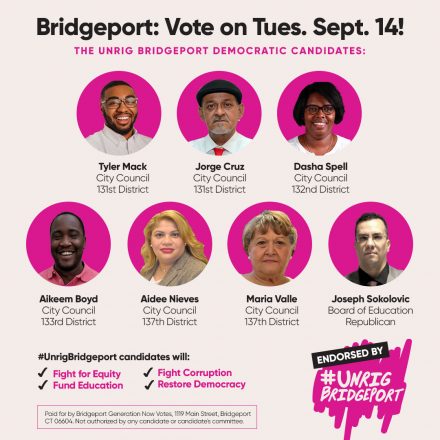 The formerly “non-partisan” Bridgeport Generation Now has announced its first set of endorsements in advance of the September 14 primaries, backing a mixed bag of incumbents and challengers, including City Council President Aidee Nieves who’s battling candidates recruited by City Clerk Lydia Martinez with whom she’s had an assortment of political beefs.

Gen Now arrived on the political scene several years ago raising money under the banner of a non-partisan reform group that really has as much an agenda for a power grab as anyone else–just different names and different dollars–but now is embracing partisan politics.

Nothing wrong with that as along as it’s up front. So maybe this is the New Gen Now that admits okay, we’re ready to play without a phony shell game?

One thing’s for sure, Nieves’s reelection, given her position, is the highest profile primary event. Keep your scorecard to see how many of the Gen Now candidates win.

Today the Unrig Bridgeport Coalition announced its first-ever slate of political endorsements in support of seven outstanding candidates running for the Bridgeport City Council and Board of Education, all of whom will be on the ballot in the city’s primary elections on Tuesday, September 14th, 2021.

The endorsed slate of candidates are a diverse mix of individuals and include both challengers and incumbents. Each of them have pledged to fight the political corruption that has plagued Bridgeport; help to fix the city’s broken democracy; and advance proposals that support good governance, and justice and equity. The #UnrigBridgeport slate of endorsed candidates includes:

(More about each of the candidates, including a short biography and an endorsement statement can be found here.)

“The Unrig Bridgeport Coalition is proud to support this slate of candidates who are committed to help Unrig Bridgeport, fight systemic corruption, and provide Brideporters with the city government and critical services they need and deserve,” said Gemeem Davis, President and Co-Director of Bridgeport Generation Now Votes. “Bridgeporters are fed up and ready for change. We want better schools, safer streets, and a stronger city, and each of these candidates stand ready, willing, and able to help make that happen.”

All candidates running for Bridgeport City Council and the Board of Education were invited to participate in the Unrig Bridgeport endorsement process by completing a candidate questionnaire, participating in a candidate interview, and taking The People’s Pledge in support of The People’s Platform–a transformative vision of a “Beloved Bridgeport” and comprehensive 30-point plan that offers a positive vision of justice and equity initiatives, good government proposals, pro-democracy measures, and takes on Bridgeport’s culture of systemic corruption. The People’s Platform, which was officially rolled out last month, was informed by hundreds of conversations with city residents at community events and meetings throughout the city. An endorsement committee made up of organizational leaders from the Unrig Bridgeport Coalition reviewed, evaluated, and interviewed all participating candidates and made endorsement decisions accordingly.

“We reviewed, evaluated, and met with each of these candidates, and we are excited by this group of individuals who have stepped up to serve the people of Bridgeport,” said Nichola Hall of the Greater Bridgeport Ed Gomes Black Democratic Club. “Our coalition is strong, deep, and diverse, and once these candidates are elected, we are committed to collectively working together to help bring about the changes that our city so desperately needs.”

In addition, today the Unrig Bridgeport Coalition also launched an accompanying voter education, engagement, and mobilization effort in support of the endorsed slate of candidates. The effort will engage thousands of Bridgeport voters, and with total voter turnout projected to be extremely low in the primary election, stands to have a significant impact. Voter engagement activities will include, but not limited to: traditional grassroots organizing initiatives (like door knocking, street canvassing and phone banking); modern online and digital organizing initiatives (like social media, digital ads and text/email engagement); and other forms of paid advertising initiatives like billboards and signage. (A sample of some of the initial campaign materials can be found here.)

The voter engagement effort–paid for by Bridgeport Generation Now Votes–is an independent expenditure campaign and not authorized by or done in coordination with any candidate or candidate’s committee.

“Every day between now and the primary election on September 14th, we are going to be talking with voters about our shared vision for positive change,” said Callie Gale Heilmann, Co-Director of Bridgeport Generation Now Votes.