Update, includes termination letter: Following a recent legal battle win regarding the removal of a concrete crushing operation in the East End, the city has terminated O&G’s services as Construction and Program Manager for school construction projects. The letter from the city does not specify cause for removal, and city officials have not yet stated the reason for the move.

The Torrington-based construction services firm was notified in a letter dated March 29 and signed by City Attorney R. Christopher Meyer. In the short term the city’s Office of Public Facilities will assume the Program Management responsibilities.

“The City expects your company to transfer complete and accurate copies or original documents where available and all other things in whatever media they are maintained of all project files for the schools that have been assigned to your company since the inception of the Agreement,” writes Meyer

“… In order to effect an orderly transition of these files pursuant to the contract, we request a memorandum as to each assigned project that is continuing or near completion listing all actions or things that are needed for final closeout of the project with the State of Connecticut and any other State agencies or authorities having jurisdiction. If O&G needs to take critical steps in the remaining days of its services to the City that, if ignored or neglected would result in harm to the City, the City expects O&G to fulfill its contract obligations as program manager and attend such matters.”

O&G is seeking to relocate its operation to the West End, spawning opposition such as the Facebook page No To O&G.

Radcliffe also ruled that “compliance with the Order to Comply, and this court’s decision, is in no way contingent upon any relocation of the O & G operation, or the approval of one or more municipal land use bodies, concerning that relocation.”

Ray Oneglia, vice chairman of O&G, wrote in a recent commentary that his company is being unfairly demonized declaring it has been a good corporate citizen to the city.

O&G has served as Program Manager for many school projects including the ongoing construction of a new school to replace Harding High on property formerly owned by General Electric. 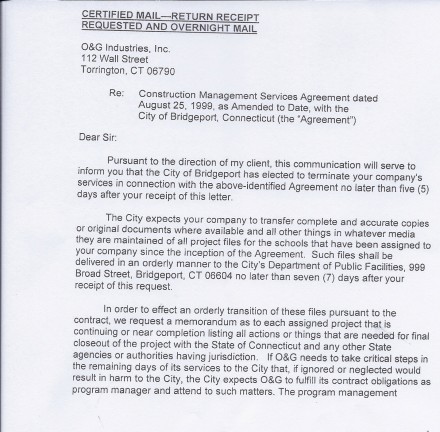 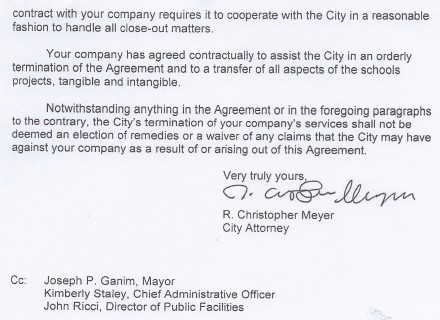