The birth of Bridgeport is 1821. Those who argue the real history starts in 1836 when it converted from a town charter to an incorporated city is a fallacy. Bridgeport never gave up its town charter. The depth of its 200-year history is led by Little Liberia, a planned sanctuary city founded in 1821 in the South End where African Americans thrived against a backdrop of national servitude. City historian Charles Brilvitch’s research unearthed this neighborhood jewel decades ago.

Maisa Tisdale and an extended team of urban warriors have passionately preserved an integral piece of this area that was on life support from myopic neglect and a national narrow-mindedness that leaves this the only one of its kind pre emancipation.

Maisa is director of  The Mary and Eliza Freeman Center dedicated to resuscitating a critical slice of African American life formed 200 years ago engineered by entrepreneurial spirit and a beacon for freedom.

She has advocated for the preservation of the Mary and Eliza Freeman Houses since 1994, and founded the Mary & Eliza Freeman Center for History and Community in 2009 after coordinating a successful movement to save the homes from demolition. As noted in her online biography, Maisa led the Freeman Center as a volunteer until 2019 when she became the Center’s first professional staff member. Over the past ten years Maisa not only focused on the restoration of the Freeman houses, but has worked to create a safer and healthier “built” environment in Bridgeport’s South End–stressing the importance of historic preservation, community development, environmental justice and climate change.

Maisa, a Bridgeport native, is the daughter of educators and civil rights activists. She is our latest interview commemorating Bridgeport’s Bicentennial. This is a must read.

Q. What is your first memory of Bridgeport?
A. I think my first memory of Bridgeport is sitting in the pew with my parents at St. Mark’s Episcopal Church on Newfield Avenue in the East End. It was cozy and intimate, a place for perfumed hugs, getting your nose pinched, and Clarence Williams’s best church breakfast. Peaceful and pretty, pastel light gently streamed through the simple, stained-glass windows on sunny days. The sound of the organ filled air that was lightly scented by flowers. Father Aaron Cuffey delivered his sermon. I wore white gloves and a fancy hat, which I loved; and an itchy, scratchy crinoline, which I hated. I only got to wear them to church … and to take the “CR Nell” (CR&L bus) when we went Downtown to Read’s. Everyone dressed up to go Downtown back then. Saint Mark’s Church was elegant in its stone and wood simplicity, highlighted by the shiniest brass fittings and accessories. My parents let me put my fifty cents in the collection plate myself!

On “April 10, 1821, two months before Bridgeport became an independent town, Seth B. Jones conveyed an existing house to people of color. John Feeley (1781-1862) and Jacob Freeman (died August 22, 1832) each secured “an undivided half interest in land and dwelling house and other buildings in Bridgeport, which suggests some sort of close relationship between these two families. Feeley and Freeman both appear on Bridgeport’s first tax list in 1821, each assessed at $3.00. The house was one-half mile to the south of Bridgeport center “on the road running from the Episcopal Church to Wells Tongue” (#8 on the map, now Broad Street). 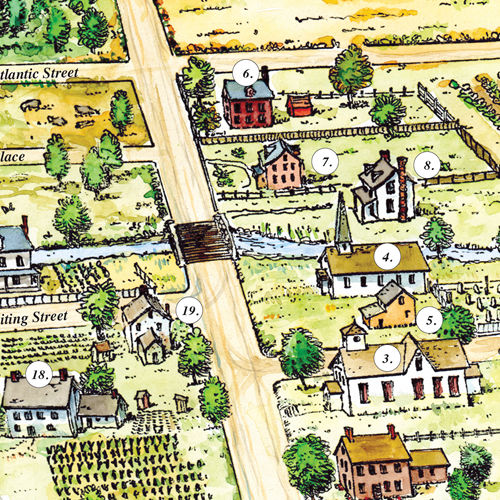 Q. What are your ties to Bpt., and what do you do, either work or volunteer work, that benefits the city and its residents?
A. I am the daughter of James Edward Tisdale and Loyse Gilliam Tisdale. My ties to Bridgeport are deep and long. Six generations of my family were born or have lived here.

My mother’s family was here the longest. That side of my family came to Bridgeport from Virginia just after the Civil War. They, Hester and Arthur Miller, lived in Greenwich until around 1880, then moved to Bridgeport. They lived in Little Liberia for a short time before moving Downtown and founding Messiah Baptist Church. My mother’s great-grandfather came here from Barbados in 1903. The family says he worked as an interpreter in the UK. He trained to be a lawyer. And though he worked as a seaman, bringing European immigrants to Ellis Island to find their American dreams, racism crushed his. He could not be a lawyer here. He worked in the homes of the wealthy, and waitered on fashionable steamers that sailed between Bridgeport and Providence. He hadn’t been raised in the U.S. and wasn’t prepared for the discrimination and denigration he faced. Interestingly enough, my mother became CT’s first Black legal secretary and my brother, born on the same day as my Bajan great-grandfather, became a Civil Rights attorney.

My Dad’s family, the Tisdales, came north to Bridgeport from Virginia during the second Great Migration of the 1930s. My grandfather refused to stand down from harassment doled out by a white factory worker on the job (that’s a nice way to put it). So … Granddad was unceremoniously hustled into a car trunk by his father, before boarding a bus some distance away to join his brother in Bridgeport–just in time to avoid lynching. He worked at Congress Street Candy before starting his own barbershop.

Both of my grandfathers overcame challenges before eventually starting their own businesses. My maternal grandfather was orphaned in South Carolina at the age of five. His labor was then sold to a white farmer who nearly killed him. He ran away two years later and got a job on the railroad. In his words, “At eight years old, I was a man!” My grandfather eventually made his way to Bridgeport, was a proud member of the Elks Club, and established P. Gilliam Custom Tailoring and Dry Goods near Father Panik Village, across from Edo’s. His best friend was “Pop Mac” McDonald Isaac the undertaker. Old timers will recognize these names. We don’t hear them enough.

Q. What do you like best about Bridgeport?
A. I like the continuity, and the network of families. If you’ve been here long enough, you realize that Bridgeport is very much a city of large families and their friends–a collection of neighborhoods that grew large enough over time to become CT’s largest city. There is great joy in navigating the city through ties of kinship, friendship, memory and culture. Bridgeport has an intriguing and colorful history that is intertwined with my family’s own. It is this love, wonder and respect that guides my work at The Mary & Eliza Freeman Center for History and Community. My family taught me there was value and growth in finding the courage, the creativity to craft a just, celebratory and prosperous Bridgeport. It was their calling in one way or another. I also love the creative environment here! I grew up in the arts workshop, Youthbridge, my mother founded with June Havoc and Paul Newman in 1968. The arts are still vibrant here and Bridgeport’s artists shine so brightly.

Q. Where is your favorite spot in the city to visit and why?
A. It’s got to be the rooftop of the PJ Murphy Building. The view is amazing! And would you believe there are seashells up there? The seagulls drop them on the roof to open them!

Q. What’s your favorite Bridgeport eatery and what do you like there?
A. Historic eatery has to be Johnson’s Refreshment Stand on Main Street across from Pop’s near Seaside Park. My grandmother, Rose Johnson, and her husband Mr. J owned and operated it. Conty’s was bigger, but nobody else had Texas Dogs, plus they sold Micalizzi Ices. Also, does anyone else remember those huge fried chicken sandwiches the Elks Club use to make–on white bread with mayo and hot sauce! And Brock Hall’s Dairy on Lindley Street–huge, delicious, ice cream sundaes, on Sunday, after church! I have lots of favorite places today. I can’t name just one.

Q. Where do you see the city going?
A. The City has nowhere to go but up! That’s the trajectory we are already traveling. I see people pulling together to pull each other up. The artists are amazing. Strategies to build businesses and jobs are being exchanged. Nonprofits are working together. The pandemic was tough, but Bridgeporters will prove tougher.

Q. If you had a magic wand and could make a miracle happen for the city, what would it be?
A. I would stop the violence. I would make people know that every life is precious and every mind is needed. Every single person would have the opportunity to find fulfillment–no scarcity. And everyone would be proud to work or live in Bridgeport.