In December 2019, then Chief AJ Perez named Rebeca Garcia, a captain in charge of the police academy, assistant chief without a competitive process. Other captains in the department hired former Mayor Tom Bucci, an employment law specialist, to represent them. Superior Court Judge Barry Stevens has sided with the plaintiffs.

In September 2020 Garcia was appointed acting chief by Mayor Joe Ganim following the federal arrest and subsequent guilty plea of Perez for scheming to rig the 2018 police chief exam. 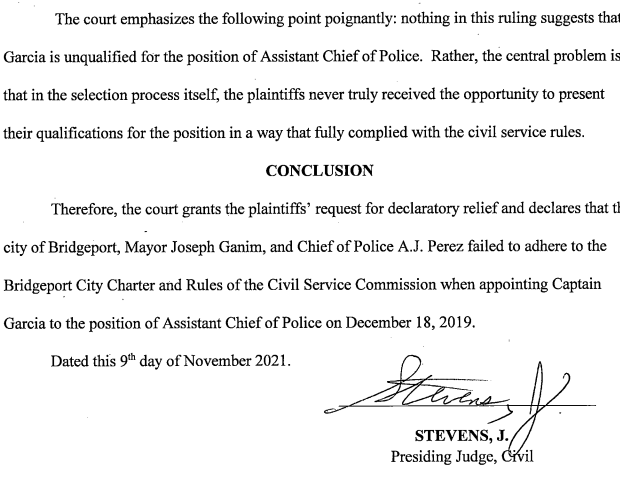 The city’s selection of Rebeca Garcia as assistant police chief was in violation of civil service rules and the city charter, a Superior Court Judge ruled Tuesday.

… “I am glad for the captains who stood up to protect the civil service system from the capricious and arbitrary practices of Mayor Joe Ganim and his administration,” Bucci said.

The ruling leaves open the question of whether Garcia can remain acting chief if she shouldn’t have been appointed assistant chief in the first place.

Deputy City Attorney John Bohannon said she can. He said the mayor can appoint anyone holding the rank of captain as acting chief in the Police Department according to the city charter.

“There is no issue there,” he added.

But Bucci countered it is a big issue.

“It’s their sham review of the charter. She was not qualified to be a candidate for chief in the last round, so how can they say she is qualified to be chief now?” he said.

… The judge stated that his ruling does not suggest Garcia is not qualified to be assistant chief but “The plaintiffs never truly received the opportunity to present their qualifications for the position in a way that fully complied with the civil service rules.”