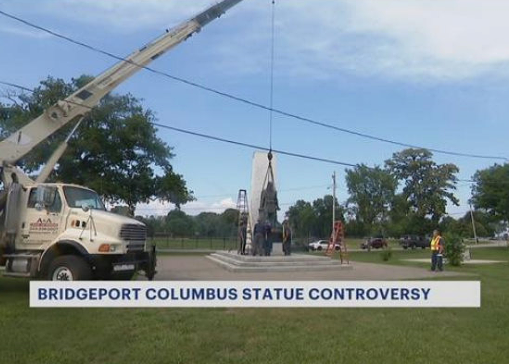 If you’re following the Christopher Columbus statue issue, you know City Council members led by Maria Pereira, are attempting to use the power of their office to “restore” it to Seaside Park, ignoring the will of the greater Bridgeport community. This is unacceptable.

On July 4th, young Black Bridgeport high school graduates led a march of approximately 70 to 100 multi-racial people (most under the age of 30) from McLevy Green to Seaside Park demanding the removal of the statue.

On July 6th, Mayor Ganim had the statue removed. City spokeswoman, Rowena White said the statue was removed “out of an abundance of caution for preservation of the historic artifact, the need to respond to modern-day sensitivities, as well as public safety at large.”

Since its removal these council members along with about three Italian Americans have been busy subverting the voices of Bridgeport residents in favor of clinging onto a false idol that represents tyranny, the genocide of Native Americans and whose exploration opened the door to the transatlantic slave trade and chattel slavery of Africans.

On July 28th these Council members forced Mayor Ganim to hold an “emergency” City Council meeting in an attempt to pass a resolution demanding the statue to be put back up. That measure didn’t pass the full council.

On July 29th the Parks Commission held a special meeting where “members of the Board of Park Commissioners voted to extend discussion on the issue until September” so that they can hear from the general public. Those Council members and the few Italian Americans did not want that to happen.

Under the cover of Primary Election Day on August 11 their undemocratic behavior manipulated the Parks Board into undoing their July 29th decision to hear from the community and voted on a resolution to direct Mayor Ganim to restore the statue to Seaside Park within 45 days. Again, this is unacceptable! And their blatant disrespect of the people of Bridgeport has them on the wrong side of history.

🔥 Email Mayor Ganim! Tell him he made the right decision on 7/6 and DO NOT put the Christopher Columbus statue back at Seaside Park! 🔥