Governor Ned Lamont on Monday marked the opening of Park City Wind‘s Downtown headquarters on Fairfield Avenue, the office space where the company will craft project development, community outreach and workforce development aspects of its nearby off-shore wind project staging area along the harbor.

The project was selected by the Connecticut Department of Energy and Environmental Protection to provide 804 MW of energy to the state.

“The opening of this headquarters is an important milestone for Park City Wind, the City of Bridgeport, and the State of Connecticut,” said Lamont. “Our state is on the cusp of being a national leader in offshore wind, and this public-private partnership is the beginning of a long and prosperous relationship. This project brings the best to Bridgeport: good paying jobs, clean energy, and a groundbreaking industry, and I am proud to be a part of this grand opening.” 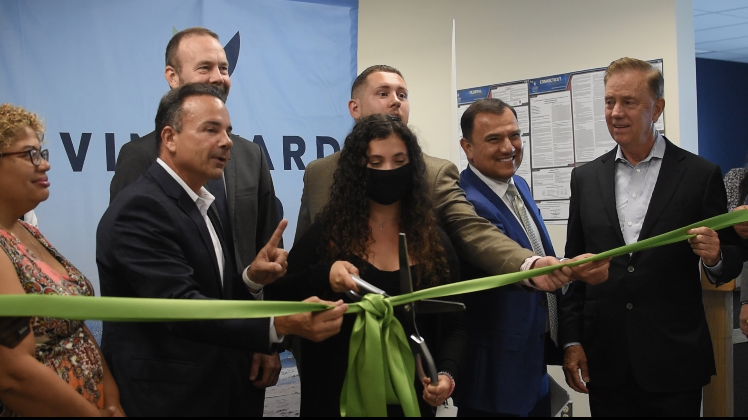 Ribbon cutting for office headquarters.
The project is a partnership between power company Avangrid whose subsidiaries include United Illuminating, Southern Connecticut Gas and Connecticut Natural Gas and Massachusetts-based Vineyard Wind.

“Today marks another important milestone as we work to bring the largest procurement of clean and affordable energy in Connecticut’s history to the state,” said Lars Pedersen, CEO of Vineyard Wind. “Between the teams that will work out of these offices and the many construction jobs at Barnum Landing, we are taking concrete steps toward making Bridgeport a hub for this new and growing industry. I want to thank Governor Lamont, Mayor Ganim and all the other elected and city officials who joined us today for their support and look forward to many years of working together as we launch an industry that will not only reduce harmful carbon pollution but also create jobs and economic development in the city and the region.”

Vineyard Wind and the Southeastern Massachusetts Building Trades Council recently signed the first project labor agreement for an industrial-scale offshore wind project in the United States. Officials say they will do the same for the Bridgeport project.

“Park City Wind represents the future of clean energy, benefiting the city of Bridgeport, the state of Connecticut, and the customers of Connecticut’s electric distribution companies. I’m thrilled that our companies are part of this important transition for our home state,” said Dennis Arriola, CEO of Avangrid. “Park City Wind is a major investment that will bring jobs and economic development to Bridgeport and clean wind power to Connecticut customers.”

Vineyard Wind also recently announced that Barnum Landing, a 15-acre parcel located at 525 Seaview Avenue, will be used during the construction phase of the PCW project, which will include storage and assembly of the transition pieces, the portion of the turbine that anchors the body of the machines to the steel foundation. Once construction is completed, Vineyard Wind intends to use 3 acres of the port site for an operations and maintenance hub that will support local jobs for the 20-plus year lifespan of the project.

The PCW project was selected by the Connecticut Department of Energy and Environmental Protection to provide 804 megawatts of clean, affordable and reliable energy to the state. Park City Wind will generate roughly 14% of the state’s electricity supply, representing the largest purchase of renewable energy in state history and is expected to include an estimated $890 million in direct economic development in Connecticut and support 2,800 full-time jobs.