As if city pols aren’t paranoid enough! The forces powering the messages that will determine if school board members remain elected by voters or selected by Mayor Bill Finch have a regular Smith versus Jones war playing out on Stratford Avenue near Central Avenue in the East End. Vote No is plastered on the headquarters door at 1242 Stratford Avenue. The next door over Vote Yes papers the window of the HQ featuring images of Barack Obama, Congressman Jim Himes and other Dems on the Nov. 6 ballot. Nothing like chummy neighbors, eh? How did this happen? One thing’s for sure, the landlord has both sides covered. 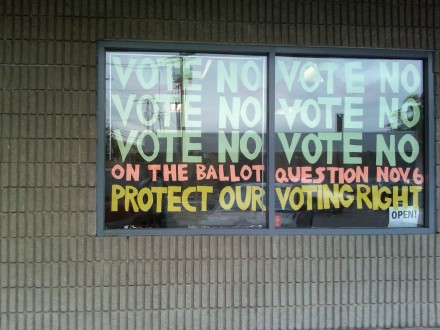 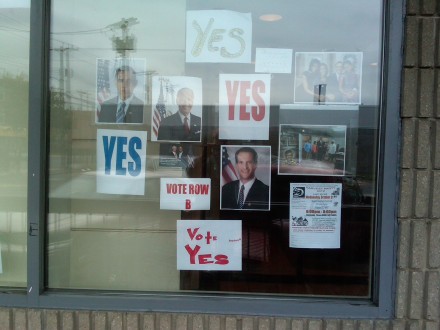 On Nov. 6 city voters will decide this ballot question:

“Shall the City of Bridgeport approve and adopt the Charter changes as recommended by the Charter Revision Commission and approved by the City Council, including education governance reforms?”

The question is located at the top of the ballot above candidates for public office. If a majority of voters fill in the yes oval, Finch will be authorized to appoint members to the Board of Education. A no majority means it stays the same, with voters choosing school board members.

The Vote No operation consists of a coalition of organizations such as Connecticut Working Families Party, Bridgeport Education Association, Bridgeport Child Advocacy Coalition, Connecticut Citizen Action Group, as well as political organizers former Board of Education President Max Medina, former City Councilman Bob “Troll” Walsh, outgoing State Senator Ed Gomes, former State Senator Ernie Newton and East End District Leader Ralph Ford. The opposition has just launched a website www.protectourvotingrights.wordpress.com. The no side is framing this message as a power grab that will forever erase voter selection of school board members. Part of the coalition challenge is explaining what a yes vote means. The question doesn’t specify that voters will give the mayor more power.

The Vote Yes operation appears to have a dual role, pushing a yes vote on the ballot question while advancing the efforts of Democratic candidates. Finch is putting his prestige on the line pushing for a yes vote across the city, saying if you’re going to hold me accountable for schools give me the power to make them better. He is highlighting  improvements made during the roughly one year an appointed state board set school policy before a special election was ordered by the Connecticut Supreme Court. A coalition of Finch political supporters has also fanned out across the city identifying voters supportive of his measure.

Aiding the mayor’s campaign is the political action committee Residents For A Better Bridgeport www.residentsforabetterbridgeport.com, expected to spend roughly $200,000 on this effort by the time election day arrives in less than two weeks. Direct-mail pieces, cable television, neighborhood canvassers and election-day workers are all part of the plan. The effort is financed heavily by the regional business community.

Wednesday afternoon an operative for the no side was guiding a canvasser about identifying no votes in the East End neighborhood. The Yes campaign was not open, but a number of pols say it has been active at night with campaign workers.

If anyone hears about a good fight between the Smiths and Joneses, please let us know.