I’ll be checking out the gubernatorial forum this morning at the Bridgeport Holiday Inn. Stay tuned for a report.

A new community print newspaper, yes a publication with ink on paper (as opposed to knuckleheads like me with a web handle) debuts this week. Look for The Independent in your local stores, shops and bars. It’s published by East Side Bridgeporter Barry “Spanky” Piesner and edited by veteran news editor Marty Autuori who fixed my copy (I needed it) when I was a young scribe at the Bridgeport Post-Telegram, predecessor of the Connecticut Post.

At a time print pubs are trying to stay alive, Barry says there’s a market in the city for a community pub that pays attention to government, politics, neighborhood news and all things Bridgeport. Readers, he says, still want to hold paper in hand. It will be in English and Spanish. So check it out.

I ran a community weekly publication for a few years called The Bridgeport Light with an amazing staff that included OIB friends Jim Callahan and Bob Fredericks. In 1988 I had a crazy idea to start a new weekly publication and stitched together a staff that included seasoned scribes from the Post-Telegram. I had baggage because I had served as administrative assistant to Mayor Tom Bucci. How do you go from mayoral assistant to a newspaper publisher who covers the administration you worked for? Well, you find a scribe who has the most sour disposition towards pols on the planet. That person was Fredericks. Bob was an amazing copy machine, he did not pull punches. He still tells me exactly how he feels. In Callahan I had a superb political analyst who knew where all the cigars were buried with a strong nose for political BS. We had fun, we broke stories, we sold ads and then when we hit 1990 the New England economy came crashing down. My biggest advertisers bailed out.

In this modern era of publishing you can create a product solely through the use of freelancers working out of their homes and eliminate the overhead of office space. Good luck to Barry and Marty. Hey, maybe I’ll write a piece for them every now and then.

Washington, D.C. – Congressman Jim Himes (CT-4) today helped pass legislation that will block a previously-set 2011 pay raise for Members of Congress. The legislation is expected to save the taxpayers $1 million, and an identical bill passed the Senate last week. Himes has championed fiscal responsibility and personal accountability for lawmakers throughout his tenure in Congress. In addition to helping block pay raises for lawmakers, Himes returned to the taxpayers $90,000 in 2009 operating expenses for his Washington and Connecticut offices.

“At a time when Connecticut families and businesses are still struggling, I can’t permit a pay raise for Members of Congress,” said Himes. “If this means one more road or school is built or 100 more workers get the unemployment assistance they need, we’ll have made a far better contribution to the economy than putting this money in our own pockets.”

Himes is committed to trimming his own operations in the same way the tough economy is forcing businesses to cut back. Himes returned over $90,000 in operating expenses allotted to staff and support his Congressional offices in 2009. In addition to helping block a Congressional pay raise for next year, Himes supported similar legislation last year that blocked an increase for 2010. Having not been a Member of Congress when the 2009 compensation was determined, Himes donated the cost-of-living increase he received for 2009 to charities in the 4th District.

In addition to tightening spending in his office operations, Himes has fought for measures to restore fiscal and personal accountability throughout Congress. Himes has voluntarily instituted a policy in his office that forbids campaign contributions from entities for which he secures an earmark, and he has frequently crossed party lines to oppose Democratic spending increases or join Republicans in supporting targeted cuts. Himes was among the first lawmakers to return campaign funds from former Ways & Means Committee Chairman Charlie Rangel (NY-15). Additionally, he has regularly voted against Democratic Leadership in calling for investigations by the House Ethics Committee.

Himes began his effort to eliminate even the appearance of conflicts of interest during his first month in Congress. The week he was appointed to the Financial Services Committee in 2009, Himes voluntarily completely divested himself of all of his holdings in the financial services industry. 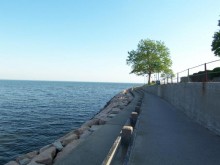 A two day fundraiser to replace 15 trees that were victims of the St. Mary’s-by-the-Sea Chainsaw Massacre.

Admission $7 for each show, $12 for both. ALL proceeds will go to the replacement of the trees, the planting and preliminary care.