New City Councilwoman Maria Pereira is a stickler for many things, among them attendance records of elected officials. Long before she entered the world of city politics 10 years ago, she was a manager in retail working for giant department stores such as Saks, Gap and Macy’s in Manhattan and Philadelphia. She had dozens of employees reporting to her. She monitored attendance then. She’s keeping score now.

During her years on the Board of Education she took note of the attendance of fellow board members.

She notes, “Our students need to maintain a 90% attendance rate to pass all subjects for a school year. Our elected City Council Members should at least be held to that standard.”

That’s the yardstick, one she terms as fairly lenient, she’s utilizing to assess the attendance record of the prior City Council for the two-year period that ended Nov. 30.

She adds that in the business world, generally speaking, employees coming to work 90 percent of the time wouldn’t last long. The least that elected officials can do on behalf of the people they represent is show up, she declares.

Pereira pored over two years of documented minutes for City Council committee meetings where the bulk of the work is done to conduct legislative business. It covers the two-year period from December 2017 through November 2019.

Most of the council members listed in the grid below are still serving. Those no longer on the council are Nessah Smith, Christina Smith, Kyle Langan, Pete Spain, Karen Jackson and Jack Banta.

What Pereira considers low attendance is highlighted in yellow, the percentages in gray are higher.

In two instances she did not count absences against council members Maria Viggiano and Eneida Martinez due to personal reasons.

She also notes in the case of Michael DeFilippo he did not join the legislative body until late June 2018 so his committee meeting potential is smaller.

To conduct your own review of attendance see here to click the appropriate drop-downs to review minutes of committee meetings.

If council members want to respond or challenge the numbers below this post will be updated. 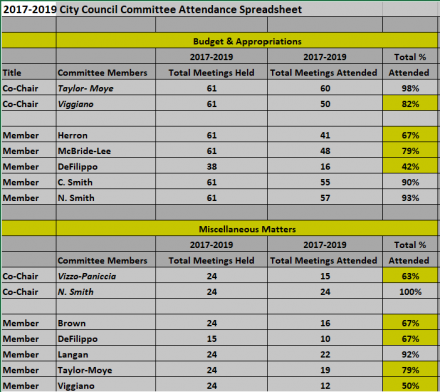