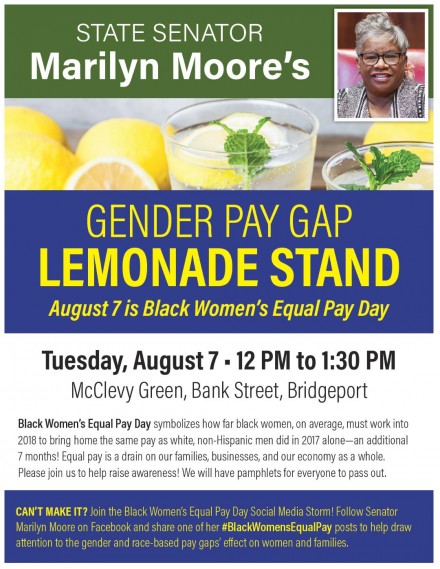 Highlighting Black Women’s Equal Pay Day, State Senator Marilyn Moore on Tuesday will mark the occasion by hosting a “Gender Pay Gap Lemonade Stand” on McLevy Green Downtown. “The amount of free lemonade poured into each cup will depend on the person’s sex and race, thus representing the disparities in pay throughout Connecticut and the country,” according to a news release. (Note to Senator Moore’s flack, it’s “McLevy” Green.)

“Black Women’s Equal Pay Day symbolizes how far black women, on average, must work into 2018 to bring home the same pay as white, non-Hispanic men did in 2017–an additional 7 months! Equal pay is a drain on families, businesses, and the economy as a whole.”