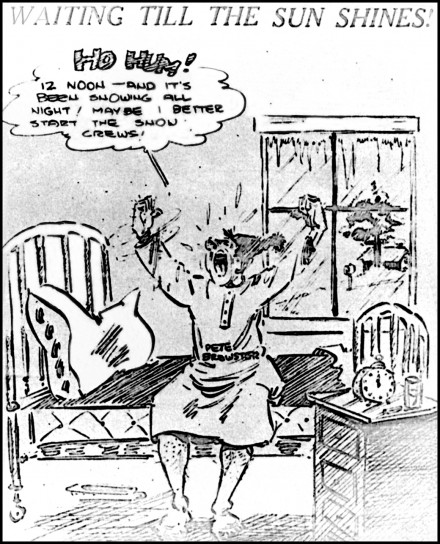 It’s a good thing for incumbents Bridgeport doesn’t conduct its elections in the spring. Some of them would be plowed into electoral oblivion from constituents cursing the winter snow removal.

For one mayor the sun was the closest thing to snow-removal machinery. In fact, it was the lonely tool of Pete Brewster, who served as director of Public Works for penny-pinching Socialist Mayor Jasper McLevy, 1933-57, considering the annual meager budget for such things.

Oh yes, Jasper was so cheap Abe grew mountain ranges of beards waiting for his penny to be spent. Each winter my grandfather cursed McLevy in Sicilian, then voted for him at election time because “He no raise the tax.”

Celebrating Bridgeport’s Bicentennial in 2021, here’s a little taste of the McLevy-era snow response from my book Only In Bridgeport.

IT’S THE SPRING OF 1939 AND BRIDGEPORT’S Public Works Director Pete Brewster is taking another needling about his tardy snow-removal operations from reporters. The scene is Billy Princes’ bar on State Street, where the truth or the near-truth about city operations flowed freely for a good many years. “Napoleon,” as Brewster’s scribe friends called him, grew angrier with each sip of his beer and each jab from the probing reporters.

How, they repeatedly insisted, could Brewster allow so much time to elapse before firing up city snowplows to clear the streets? Brewster, of course, had been smarting since the previous November when the Herald had plowed him for “waiting ’til the sun shines” to clear the streets of snow. “Napoleon fails to fight storm, thousands suffer,” the scandal sheet’s headline declared. “Sole responsibility for the terrible condition of Bridgeport streets following last weekend’s double snowstorm rests with Director of Public Works Peter P. ‘Napoleon’ Brewster,” crowed the story’s opening paragraph. In addition, for practically every week that winter, the Herald poked fun at Brewster’s snowplowing direction. After all, the city had initially appropriated only $300 in the budget to cover the cost of snow and ice clearance that year.

So, with several months of persistent nagging catching up to him, Brewster picked this moment in Billy Prince’s to break his long-standing silence. “Let the Guy who put the snow there take it away,” he cut loose. Bridgeporters were never satisfied by the excuses given for the lack of snow removal, but this was the Depression, and although many vociferous complaints about mushing through the snow had piled up, residents had by then grown accustomed to their penny-pinching Socialist Mayor Jasper McLevy.

With each passing winter and with more taxpayers’ complaints about the snow-covered streets, the story of how Jasper McLevy said “God put the snow there, let Him take it away,” has been told countless times in front of fireplaces, in snow-stranded vehicles and yes, in bars. Jasper McLevy, down through the years, involuntarily received the credit for a line coined by his long-time and trusted employee, but for Bridgeport it represented a sign of the times and the tight spending of a reform mayor who helped lift Bridgeport out of bankruptcy and out of the dog days of the Depression.