We finally have an airport deal. From the Connecticut Post:

With 14 members present, only Council Member Robert Walsh, D-132, voted against the resolution. Later, he said he didn’t want to publicly say why.

“They have all of our approvals,” Anastasi said.

The deal would reportedly give the city the acre it needs to build a safety zone at the airport. Bridgeport Airport Services would get the nearby Stratford Army Engine Plant’s 4,000-gallon water tank, three pumping systems and pipeline as well as access to sewer services. Hollywood East/Area 51 would then close its deal with the Army to buy the engine plant so it can develop a movie production studio.

One lawsuit was filed in March by Bridgeport against the U.S. Army over legal title to the 1.075-acre plot being sold to Hollywood East. The second, filed a week later, pitted Bridgeport Airport Services against Bridgeport over fire suppression and sanitary sewage systems. The suits halted the engine plant’s sale in April.

The deals comes after a crash landing last month at the airport of a chartered single-engine plane. The plane skidded into a runway. No one on board was injured.

Assistant City Attorney Art Laske did a nice job leveraging legal action to strike a deal. But I’m wondering why Bob Troll Walsh was speechless on the matter. That might be a first. Troll, you know something we don’t?

Okay, mark your calendars. Time for an OIB summer outing. We’re doing it up July 23, 5:30 p.m. at Taco Loco on Fairfield Avenue in Black Rock. It’s hot so we need some frosty cocktails to complement all this fired-up port authority chatter. The genial owner of Taco Loco, the legendary Miguel, promises us a slammin’ time. First cocktail on OIB plus lots of delicious Mexican grub. I can’t wait. Spread the word. Maybe Anna will drop a jalapeño in Yahooy’s shorts. Ouch!

Cannot wait for big Mojo to set things straight. Maybe Andy Fardy and Ron Mackey, old fire department comrades, will show up to put out a few political fires. Oh, wait, I forgot … they’re usually starting them. Hey, that’s what we like at OIB … some fiery verbal exchanges. Spread the word.

Can’t wait for my favorite bartender Tom Kelly to confuse us all.

The Connecticut Supreme Court rejected a plea from the Diocese of Bridgeport to reconsider public access of all those documents that led to millions and millions of dollars in sexual abuse case settlements, etc. Never give up, never give in is the mantra from the clergy elite. Keep fighting it, keep blocking it and the flock shall never waver. Really? Yes, OIB.

John and I guested a National Public Radio show at WFOV, the radio station at Fairfield University, a few months ago. The political science professor who had needled Joe Lieberman’s remarkable transformation away from the Democratic party seemed fit, engaged, so eager to discuss and share his viewpoint on politics nationally and locally. And during breaks he had so many questions about the unique world of Bridgeport politics. Joe Ganim, John Fabrizi, Bill Finch, you name it.

Lennie, c’mon in and talk to my students!

John Orman has passed on a warehouse of political perspective and observation to his students.

A Card For A Kid 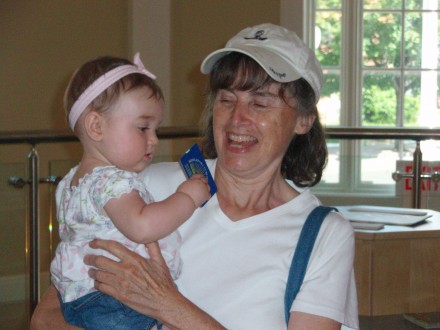 6 month old Cassidy Belle D’Andrea is the first person to receive a library card at the newly reopened Black Rock Branch Library.  She’s in the arms of her proud grandmother Edie Cassidy. Thanks to OIB friend John from Black Rock, a dedicated library employee, for sending the image.

The CT Dept of Agriculture working in conjunction w/the city of Bridgeport Office of Planning and Economic Development and the Downtown Community Council (DCC) announces the opening of the States newest farmers’ market: The Downtown Bridgeport Farmers’ Market @ Baldwin Plaza, behind the court house will take place every Tuesday from 1 p.m. – 6 p.m. It will open July 7 and run through October. Three farms have initially signed up for the market. Country Farm from Northford, a 60 acre mixed fruit and vegetable farm specializing in tomatoes, melons, and bedding plants. Killiam & Bassette Farmstead from South Glastonbury , an 85 acre farm, specializing in corn, tomatoes and peppers. Smith Acres from Niantic, a 27 acre farm, specializing in bedding plants, potatoes, and summer squash. All three farms will have a mixed variety of CT Grown fruits and vegetables throughout the summer and early fall. This market is WIC certified.

Governor M. Jodi Rell today signed a bill that allows pet owners to set up enforceable trusts to care for their animals, ensuring that the animals are not neglected or euthanized if they die before their pets.

“Those who derive joy from the companionship of their devoted pets can now have peace of mind knowing their pets will be properly cared for when they are no longer around,” Governor Rell said. “Pets ask nothing of us but kindness and, in turn, reward us with unconditional love.”

Senate Bill 650, An Act Concerning the Creation of a Trust for the Care of An Animal, requires that the pet owner designate a “trust protector,” someone whose sole duty is to act on behalf of the animal, ensuring the pet receives the proper care.

A Superior Court or probate court would have jurisdiction over the trust, which terminates when the last surviving animal dies. The trust protector can seek legal action in either court to remove or replace a trustee, the individual overseeing the fund, if the money was spent on anything other than its intended use.

Prior to the new law, pet owners could set up trusts for their animals but those arrangements were considered honorary since animal beneficiaries cannot enforce them.

“Pet ownership is a responsibility that should never be taken lightly,” Governor Rell said. “Owners can now ensure that their special member of the family will get the care it deserves for the rest of its life.”