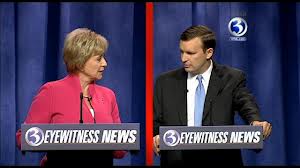 Somewhere along they way one of the campaigns needs to break out of the hysteria to help their candidate  explain what they’re going to do when they get there. Most electors vote on the future. As OIB friend John Gilmore, former political columnist, declares: “What’s in it for me?” Modern elections of this type are not driven by the candidates. They’re driven by the campaign handlers. Now that’s a cynical statement, you might argue. Some candidates are so good they connect by the force of their personalities. But candidates today, at this level, anyway, are swarmed by campaign handlers who dictate message, strategy and when and where the candidate shows up and for the most part what comes out of their mouths. They live to program the moment to avoid the trappings of unscripted moments (and hold their breath during debates).

McMahon’s campaign has accomplished a must in this cycle, win over women voters who delivered Dick Blumenthal’s win in her first crack at U.S. Senate in 2010. Polling shows McMahon’s doing much better with women who questioned her affiliation with the violent wrestling empire she helped build. The Murphy campaign is trying to recast doubt about McMahon to bring back those female voters. Men are generally pretty easy to figure out: “You raise my taxes I punch you in the nose.” Women process information through a nourishing filter. They’re interested in multiple issues. Yes, they care about taxes, jobs and the economy, but they also wonder: “Is my kid safe with this person in power?” “Do they work well with others?” “Will any Social Security money be left?” And female voters break late.

Some will argue with incredulity that McMahon is trying to buy a race with her enormous wealth. The other day the Murphy campaign kicked out a news release crowing about its eclectic support around the state. It was loaded with special interests that have donated to his campaign. So what would you rather have, a candidate who self finances a race no one can buy? Or a candidate whose donors are trying to buy him? It’s an argument the McMahon campaign is making.

We now live in a world with an inherently corrupt federal campaign financing system, loaded with independent expenditures, in which the most effective elected officials are those who know how to be ingrates when it counts. Public financing of federal campaigns does not exist. It does in the state of Connecticut on a voluntary basis. Wouldn’t it be nice for the federal system?

Murphy, after several bad weeks, appears to be gaining his footing. Murphy’s race wasn’t supposed to be this hard. McMahon and Murphy faced off in a debate Sunday. For various reports, visit www.ctcapitolreport.com.

ROCKY HILL- While former wrestling CEO Linda McMahon continued leaning on political attacks and copied-and-pasted right-wing Republican policies, Chris Murphy won today’s debate by focusing on the issues that matter to Connecticut voters and highlighting the contrast between his work fighting for middle class families and McMahon’s work fighting for millionaires and billionaires like herself. McMahon’s stale smears fell flat as she was forced to actually discuss the issues that voters care about.

“Once again, Linda McMahon did everything she could to hide from the right-wing Republican policies she supports to end Social Security, privatize Medicare, and protect tax cuts for millionaires and billionaires, but voters were able to see right through that in this debate” said Murphy campaign spokesman Ben Marter. “This debate made it clearer than ever that Chris Murphy is the only candidate in this race fighting for Connecticut’s middle class, jobs, seniors’ benefits, and women’s rights. Now that Chris has won this debate we expect McMahon to double down on her desperate campaign of lies and smears. But it didn’t work when she did that in 2010 against Senator Blumenthal, and it’s not going to work now.”

Throughout the debate, McMahon continued her attempts to distort the extreme policies that she supports, including dangerous Republican legislation to deny Connecticut women coverage for birth control, mammograms, and cervical cancer screenings. When asked to discuss her support for these extreme policies, McMahon insulted women across the state by saying that because she is a woman, her policies shouldn’t matter.

McMahon also struggled to avoid her plan to end Social Security and privatize Medicare through the Ryan Plan. She refused to discuss how the economic recession has affected her and ducked questions about her blood-oath to Grover Norquist’s to never raise taxes on millionaires and corporations that ship jobs overseas.

When the debate turned to jobs, Murphy detailed his Buy American legislation and discussed his support for middle class tax cuts and Connecticut’s defense manufacturing industry. McMahon, who supports tax cuts for millionaires and billionaires and has no estimates on the real impacts of her jobs plan, only offered vague, far-right sound bites.

This morning, Chris Murphy and I had a spirited, informative debate on “Face the State.” I hope that you had the chance to tune in and see the clear choice that the people of Connecticut have in November.

You have a choice between a proven job creator and a career politician who has never created a single job.

You have a choice between someone who would cut middle-class taxes, saving an average Connecticut family of four $500 a month next year, and someone who has, and will, raise taxes on the middle class.

You have a choice between someone who can’t be bought by special interest groups and someone who has already gotten a special loan deal from a “strong campaign supporter” who later received a $400 million taxpayer bailout.

You have a choice between someone who has shown up for work every day of her life and someone who has failed to show up for his taxpayer-funded, $170,000-a-year job 75% of the time.

You have a choice between someone who will fight to protect defense jobs and someone who has voted to cut funding for Connecticut sub bases–twice.

Chris Murphy is a career politician whose highest ambition has been to hold political office. He has spent his entire life in elected office.

My ambition is to make sure our kids and grandkids have better opportunities than we did.

As a Democrat in Connecticut, Congressman Murphy expected a coronation rather than a campaign. He underestimated you.

Now that he finds himself in a serious race against a serious woman, his special interest friends are trying to bail him out and have taken over his campaign. They have launched false cookie-cutter attacks in a desperate attempt to distract voters from the fact that Connecticut unemployment has doubled since Congressman Murphy went to Washington. Taxes are up, wages are down, and people are hurting.

We need someone in Washington who can get Connecticut working again. I am the only candidate in this race who can, and will, do that.

We don’t need another career politician in Washington. We need someone who will fight for you–who believes America’s best days are ahead and not behind.