4 p.m. update: Why do I get the feeling Carmen Lopez isn’t going away any time soon?

The retired superior court judge from Black Rock has filed a complaint with the state claiming the Civil Service Commission violated Freedom of Information laws when (and after) it terminated Ralph Jacobs as personnel director. Jacobs is challenging the termination in state court. The commission conducted a hearing, with Jacobs present, but went into executive session to deliberate and determine his fate, something Jacobs’ lawyer former Mayor Tom Bucci says violates state law.

See Lopez’ complaint below. A sidebar to her action is her charge that City Council President Tom McCarthy dissed her after, she says, a clerical error by the city clerk’s office failed to place her on the speakers list for the City Council meeting tonight. Lopez informed OIB via email:

“Upon being notified of the error, a request was made to the City Council President to allow me to speak. The request was refused by Mr. McCarthy, notwithstanding the fact that three of the six spaces remained unfilled. Therefore, I will not be speaking on the Freedom of Information topic until the next City Council meeting. I have been advised that I have a five minute ‘spot’ for that meeting.”

Former City Council President Lisa “Honey” Parziale has weighed in as well telling OIB in an email that she would have accommodated Carmen’s request.

“I find it ironical that (Lopez) was denied the right to thank her supporters at the last Town Committee meeting when she didn’t prevail as a candidate for the Board of Education, and now the President of the City Council arbitrarily denies her the right to request to the full council her right to speak. I have a little experience with the City Council. As Council President I never denied anyone the time to address the Council members even if they didn’t sign up in advance. As long as there was a time spot available, I deferred to the members in attendance, and as long as there was no objection the individual was allowed to speak. I feel the present Council President exceeded his authority, and denied his colleagues a great opportunity to hear from the Judge. Fortunately, Judge Lopez will be speaking at the first meeting in October.”

The Jacobs case is becoming curiouser and curiouser. The rule of law is a great place for a retired judge to pursue to win over the electorate, especially city employees who fear the way Jacobs was terminated: something called breach of city loyalty involving a letter he sent to an attorney of a city employee who had a dispute with the labor relations office.

Jacobs has both his supporters and detractors among city employees. But when I talk to city employees they say if they can do that to him, what about us? Lopez has stepped up to take on some important issues such as urging the city to address a rodent problem in the West End and now the Jacobs case. She also has a number of pols pushing her to run for mayor. Carmen’s not saying she’s leaning that way yet, but taking on hot topics is a nice place to start should she decide to run for mayor.

Lopez complaint to the Freedom of Information Commission:

I explained to Mr. Dunn that the minutes of the August 21, 2009 meeting were not available for inspection, and had not been posted on the City’s web site. This was, and to my knowledge remains, a violation of Section 1-225(a) of the General Statutes which reads:

“the votes of each member of any such public agency upon any issue before such public agency, shall be reduced to writing and made available for public inspection within forty eight hours and shall be recorded in the minutes of the session at which taken. Within seven days of the session to which such minutes refer, such minutes shall be available for public inspection and posted on such agency’s internet web site, if available….”

Mr. Dunn informed me that the minutes “are being prepared,” and asked that I request a copy, “in writing.” I expressed to him my belief that an email is “a writing” and satisfies the requirements of Section 1-212(a)of the General Statutes, which requires a person to apply for a copy of a public record “in writing.”

In addition, Mr. Dunn informed me that the City Attorney would review the minutes before they were made public. The taking of minutes would seem to be a function of the Commission’s secretary or Clerk, and not the City Attorney.

To date, I have received no response from Mr. Dunn, or from the Office of the City Attorney concerning my request for copies of any minutes which may have been prepared, despite a second communication on September 10, 2009. (see attached forwarded email.)

I am therefore requesting that the City of Bridgeport be found in violation of the Freedom of Information Act, due to its failure to compile, post, and make available, minutes of the August 21, 2009 Civil Service Commission meeting.

I also believe that there has been a violation of the Act, upon information and belief, because the Executive Session was illegal, and the public should not have been excluded.

Furthermore, requesting a document from the City of Bridgeport via email is a “writing” as that term is used in the applicable statute.

I believe that some or all of the above referenced violations of the FOI Act were committed without ‘reasonable grounds’ in violation of Section 1-206(b)(2) of the General Statutes.

I therefore request that a civil penalty be imposed.

Former Republican State Senator Rob Russo will formally declare his candidacy for U.S. Representative in Connecticut’s 4th Congressional District on Tuesday. Russo will join State Senator Dan Debicella as the two Republicans challenging Democrat Jim Himes. The incumbent is piling up a mighty warchest for reelection, and he’ll spend several million dollars, so the Republicans will devote most of their time the next six months raising dough. Can’t compete in that kind of race without it. Russo and Debicella are friends so don’t look for a contentious competition between the two. The candidate that can raise the most loot and garner convention support will face Himes. Unless, of course, some money-lathered Republican shows up and says here’s my $3 million. Different story.

Believe in Barnum and believe in Santa. Tom Santa, chief executive of Bridgeport-based Santa Energy will lead the Barnum Festival in 2010, the 200th anniversary of Mr. Barnum’s birth. Former WICC news director Tim Quinn, a festival promotional hand, was kind enough to share an image of Santa courtesy of photog extraordinaire Wayne Ratzenberger, and also a glimpse into the new ringmaster. See below: 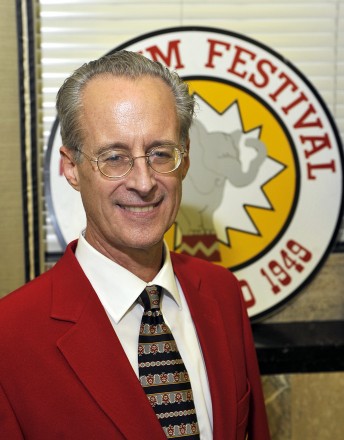 Here’s a different way to celebrate your 54th birthday, get named the Barnum Festival Ringmaster! It happened to Tom Santa this week. The CEO of Bridgeport-based Santa Energy was elected by the Barnum Festival board of directors and was introduced to a large, supportive crowd at Bridgeport’s Aquarion headquarters.

Santa succeeds Michael E. Niedermeier as the man in the top hat, red coat and white pants,and is now the Festival’s 62nd Ringmaster. Santa says his goal will be to reach out to the community for new people with new ideas to make the Barnum Festival bigger and better.

This will be a special year as it marks the 200th anniversary of the birth of P.T. Barnum. the Barnum Museum says they are planning all sorts of special events and will work closely with the Barnum Festival, as they have for many years.