Tucked into the stimulus relief bill signed by President Biden is something leaders from cities and towns across America have jawboned their congressional representatives for help. Now many of them are gleaming following a year of dystopian despair.

Bridgeport is projected to receive roughly $241 million in direct aid that can be leveraged for education, infrastructure, public safety and more.

Congressman Jim Himes is expected to release specific details next week at a news conference with Bridgeport officials.

Municipalities are expected to receive the money prior to the local budget year starting July 1. That means city bean counters can factor in the loot in areas most needed during the upcoming budget cycle. The money is designed to hold the line on taxes while dishing out additional dollars in areas lanced by the health emergency as well as addressing infrastructure concerns and economic development projects.

Mayor Joe Ganim is about three weeks away from submitting his spending plan to the City Council. It will be referred to the Budget & Appropriations Committee co-chaired by Scott Burns and Ernie Newton.

Some of this money will be a no-brainer: education, public safety, health care. Other spending pieces will require some priorities and imagination. For instance, will it be directed to the long-languishing Congress Street Bridge? Other infrastructure projects such as upgrades to the city’s archaic sewage treatment system? What about the boarded-up theaters Downtown? A new Bassick High School is scheduled for construction on the campus of the University of Bridgeport. These federal dollars can help finance the difference between the state and city allocation.

The moolah will be parceled out over a couple of years.

The dialogue between the executive and legislative branch should be engrossing in how the money will be spent. They all have their pet projects.

The upcoming allocation is separate from an ambitious federal infrastructure bill Biden is proposing to Congress.

See below the payout grid for Connecticut’s Fourth Congressional District. 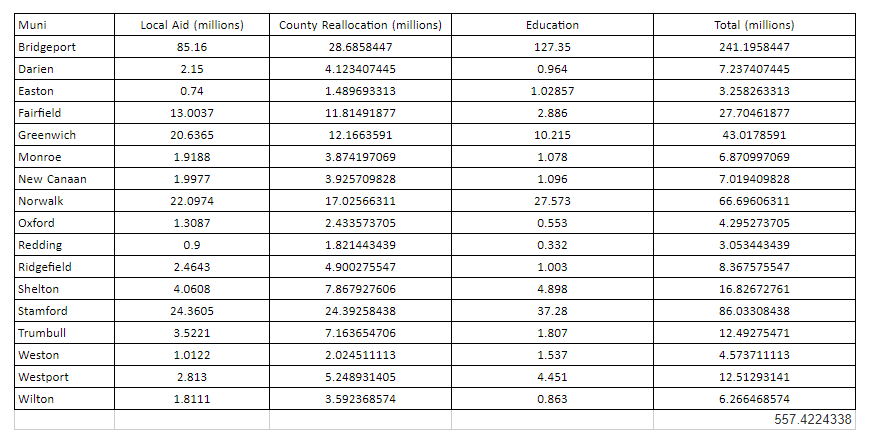