Bradley and outgoing Board of Education member Jessica Martinez, who served as his 2018 campaign treasurer, are charged with multiple counts of wire fraud for alleged connivance of Connecticut’s campaign finance system of publicly funded races. Bradley’s the big fish in this case, but Martinez who’s had several scrapes with the law that attorney Bradley has defended on her behalf, has a different set of issues, accused of providing false statements to a grand jury and FBI agents.

If Bradley manages to beat the charges he’ll seek reelection in 2022 and poise himself for a mayoral run in 2023.

What if he’s convicted? His political career is on hold. Strategic machinations are underway should a special election be required to fill Bradley’s seat. Names floating at the top of the insider list?

City Council President Aidee Nieves, who brings an East Side base, for one; State Rep. Andre Baker, whose sweet spot is the East End, another. Who knows who else would jump in? Too soon to predict.

If the field becomes larger would maverick City Councilwoman Maria Pereira give it a shot with establishment pols splitting up the vote? It would be a narrow path for the self-styled piranha of city politics, well-regarded in her Upper East Side district but shallow in political support outside of it.

What happens should a vacancy occur? This, according to Gabe Rosenberg, spokesperson for the Connecticut Secretary of the State:

In general, when a vacancy occurs in a seat in the General Assembly, the timing is as follows (according to CGS 9-215):

If the vacancy occurs between 125 days and 49 days (7/6/22 – 9/20/22) before a statewide or municipal election, the special election would be held on the same day as the regular election.

The same statute details the nomination procedure; the delegates to the senatorial or assembly convention for the last state election would be the delegates for the purpose of selecting a candidate for a special election.

Yes, all of the above can provide a bit of whiplash, but the statute could be in play, depending on Bradley’s outcome.

The government has lined up several witnesses to testify on its behalf to corroborate the allegations against Bradley.

See “Other Relevant Individuals” below: 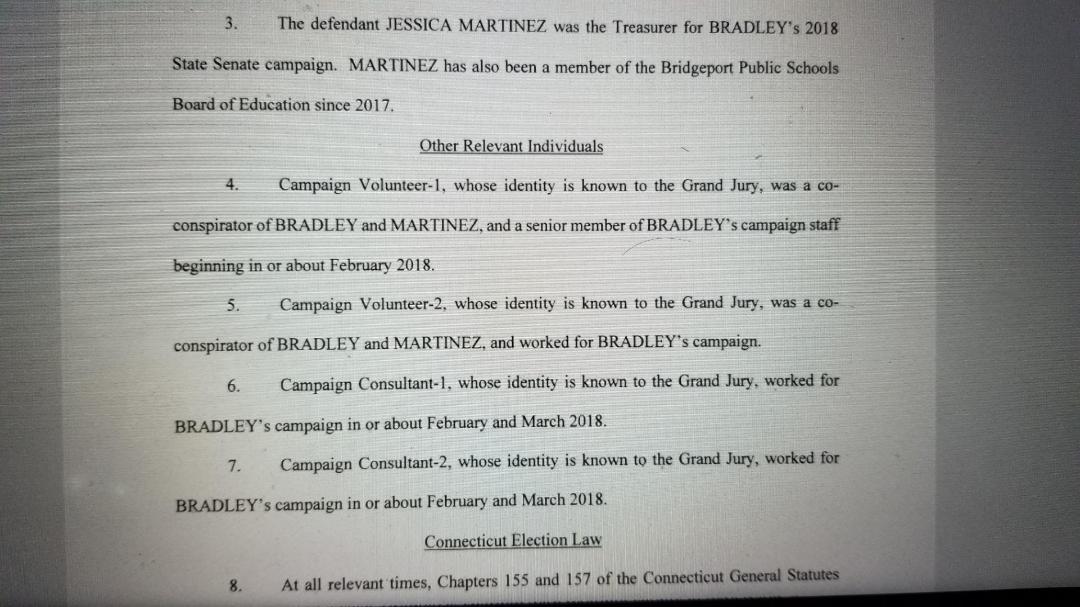 According to the indictment, in a nutshell, here’s what Bradley must overcome:

— Leveraging his law firm as a campaign front for what was clearly a candidacy announcement for state office on March 15, 2018 at Dolphin’s Cove in the East End.

— Raising campaign money at the event in violation of state law.

— Directing campaign staff, covering his tracks, to falsify donation cards to reflect the fundraising did not take place March 15, 2018.

— Using $6,000 dollars of his own money, transferred from a personal law firm account, to pay for the Dolphin’s Cove event, in violation of state law.

— Not reporting, as required by state law, the personal expenditure on campaign finance reports.

— Falsifying campaign finance reports to receive $84,140 of public dollars in aid of his campaign.

— Trying to do the same for the general election, but was rejected by the State Elections Enforcement Commission when it discovered numerous irregularities.

Where do the federal violations come in? Wire fraud such as texting, emails, electronic transfer.

Whatever happens to Bradley, win or lose, a chain of events will trigger intrigue in 2022.