Three of five candidates appearing on the ballot in Tuesday’s State House special election are calling on elections officials to conduct supervised balloting in mostly senior citizen buildings requesting a high rate of absentee ballots. Kate Rivera, Hector Diaz and Josh Parrow are also charging a conflict of interest between Democratic Registrar Sandi Ayala and her candidate daughter Christina Ayala who works in the Registrar’s Office.

Elections officials, in this case the local registrar’s office, can conduct supervised balloting when a flurry of absentee ballot activity takes place in multi-dwelling buildings such as senior housing facilities. The state legal standard is generally more than 20 requests for ballots to place a check on possible abuse. Under supervised balloting elections officials set a time and place for residents of the respective building to fill out the ballot.

Antonio Felipe is the endorsed Democrat who’ll appear on the top line. Parrow is the endorsed Republican. Rivera, Diaz and Ayala have petitioned onto the ballot. Felipe and Rivera both qualified for public campaign money that will avail each to spend $20,000 in the final days of the race to fill the 130th State Assembly seat of Ezequiel Santiago who died in March.

The district covers Downtown, South End, and portions of the West End and East Side. District wide about 500 requests for absentee ballots have been made.

It will be difficult for elections officials to conduct supervised balloting before the Tuesday vote given the time constraint. In addition, many voters in those senior buildings have already filled out their ballot and mailed it. The ballots are processed by the Town Clerk’s Office, but tabulated by the Registrar’s Office when the polls close.

In the spirit of transparency and clean elections candidates Kate Rivera, Josh Parrow, and Hector Diaz request that the following addresses have supervised balloting effective immediately. We are requesting for supervised balloting in five locations for the Special Election on Tuesday, May 7th 2019 due to suspicion of a not only a conflict of interest, but general absentee ballot abuse.

Our residents have been and will continue to be disenfranchised by this decades-long, pervasive abuse of the absentee ballot system. We are truly undermining the purpose of absentee ballots: to ensure that those who are ill, disabled, out-of-town on the day of the election, serving in the armed forces, or even working at the polls on that day can have the opportunity to have their voice heard by casting an absentee ballot.

We respectfully ask for a clean, transparent and expedient process to ensure that democracy will prevail in this Special Election. We trust that as public servants you will serve the public and uphold the highest standard in our election process. 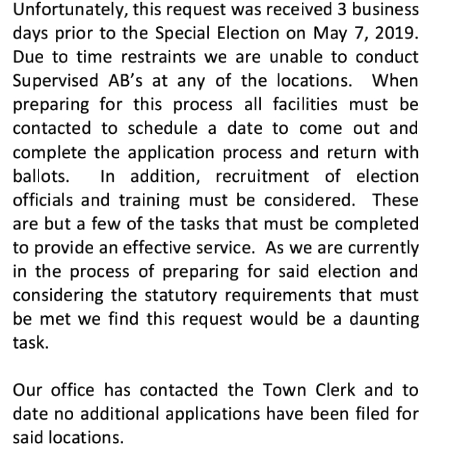