City Council candidate Michael DeFilippo falsified voter registration cards and absentee ballots of his North End tenants in furtherance of his legislative run in 2017 and 2018, according to the indictment issued by a federal grand jury. Read full U.S. v. DeFilippo – Indictment.

DeFilippo, 35, is a landlord of several properties in the North End, some of which are occupied by students at Sacred Heart University.

The indictment declares that DeFilippo intentionally conspired and agreed with others to “injure and oppress voters … by stealing and falsifying voter registration and absentee ballot documents, forging signatures, and returning fraudulent documents to the Bridgeport Town Clerk.”

DeFilippo, who is represented by criminal defense attorney Frank O’Reilly, entered a not guilty plea. The case is assigned to U.S. District Judge Victor Bolden who’s overseeing the election fraud indictment of State Senator Dennis Bradley who is scheduled for trial in December.

On Thursday, DeFilippo resigned from the City Council.

This case, according to the indictment, has an unindicted co-conspirator who could be someone cooperating with the government.

In one trial police officer Paul Nikola testified then-Police Chief Armando Perez, now serving time for rigging the police exam that raised him to top cop, ordered him to see Democratic Town Chair Mario Testa at his pizzeria where Testa introduced him to DeFilippo who gave the officer addresses to fetch absentee ballots of voters.

Cops can assist with delivering ballots at the request of voters, but not at the direction of party regulars, according to a ruling by the Connecticut Supreme Court.

Judge Bellis directed court transcripts be sent to state law enforcement authorities. Did they refer it to the feds?

DeFilippo has bartended for many years at Testa’s restaurants. At Monday night’s Democratic Party endorsement session for City Council, which DeFilippo attended, he inexplicably pulled out of running. The following day the indictment was returned. City Council members were shocked by the news. This investigation operated under the radar.

Bolden’s assignment of the case presents some intriguing questions as legal insiders speculate a possible connection to the Bradley case or perhaps a broader corruption investigation with more to come.

While close to the town chairman, DeFilippo however has been a fierce public and private critic of Mayor Joe Ganim, often voting against administration advancements just because.

Bradley maneuvered preemptively to support his political pals, writing letters to the Department of Justice and New England Commission of Higher Education questioning the veracity of Goodwin University’s takeover of UB which has been approved.

Bradley had met privately for months with political leaders such as City Clerk Lydia Martinez, his political godmother, and connected council members, planning the dubious UB takeover. The full City Council rejected it.

Councilman Matthew McCarthy summed it up quite nicely during public discussion: “The city of Bridgeport has no business running a university.”

So there could be some symmetry between Bradley and DeFilippo et al. The government says others are involved in the DeFilippo conspiracy. 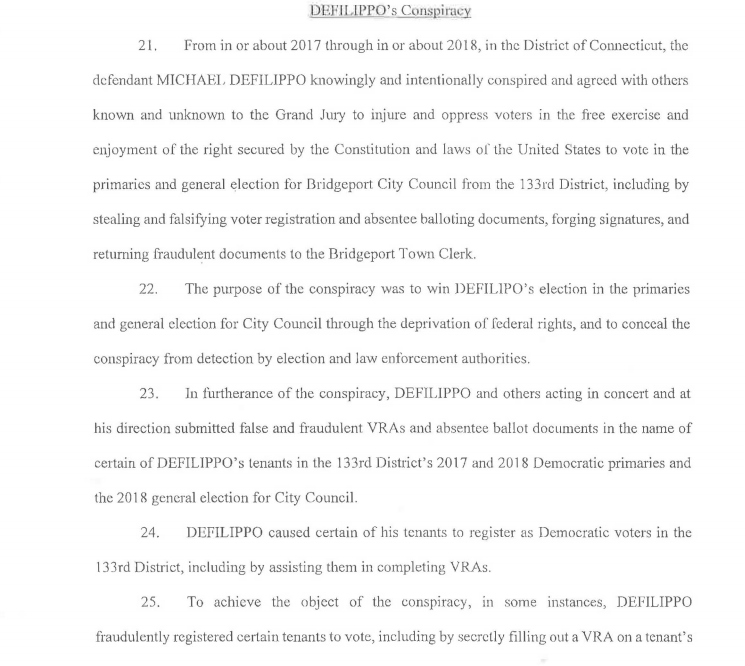