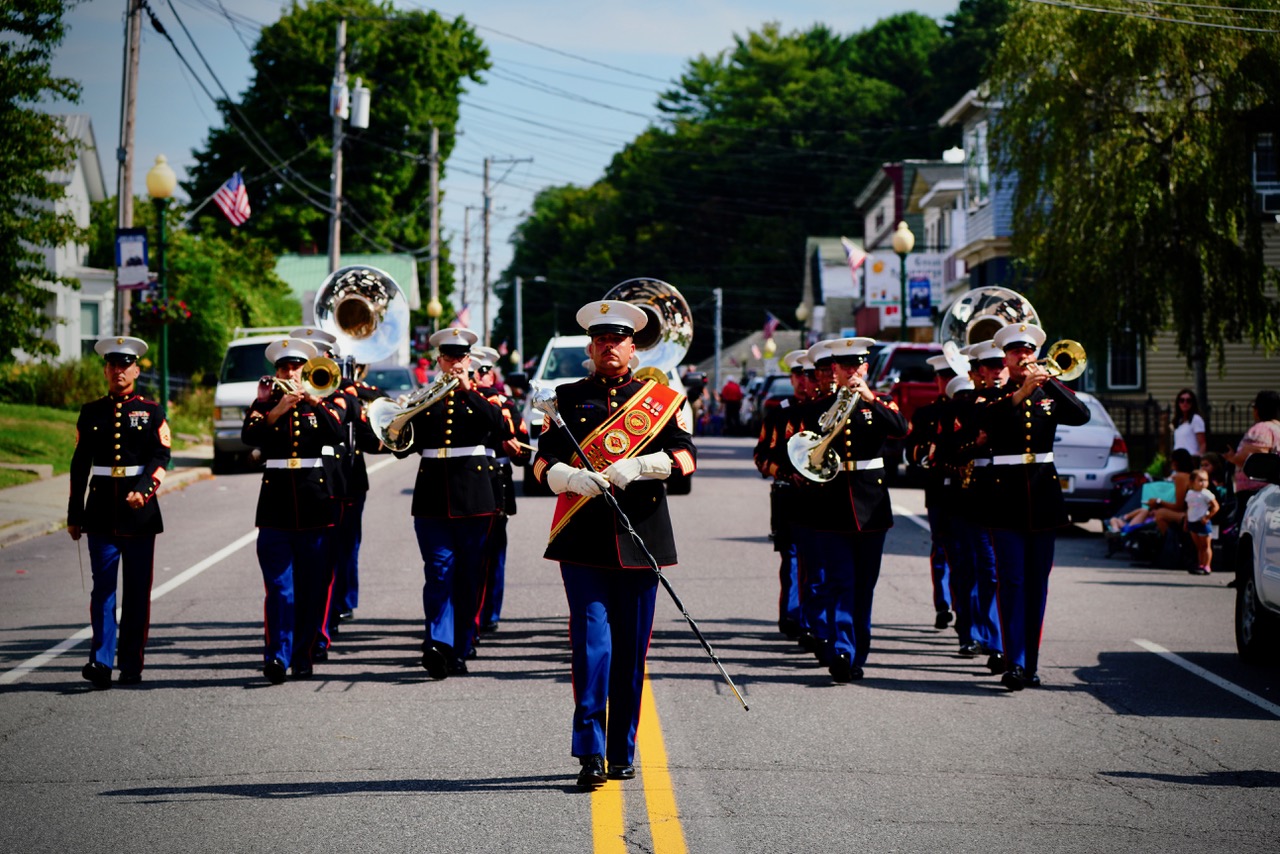 The Council of Italian-American Societies of Greater Bridgeport is excited to announce that after a 2-year hiatus, the Marines will be back in Bridgeport this year. 2nd Marine Aircraft Wing Band from Cherry Point, North Carolina will perform two free public concerts on Sunday, October 9, and Monday (Columbus Day), October 10, as part of the Council’s annual Columbus Day Parade & Celebration.

A much-anticipated highlight of the week’s-long celebration, the Concerts will take place at 6:45 p.m. each evening at the Klein Memorial Auditorium, 910 Fairfield Avenue, Bridgeport. The doors will open at 5:30 p.m. This year, the theme for both Concerts is “Reunion!”  After a difficult two years caused by the Pandemic, the Band, through music, will bring the community back together. As in past years, concertgoers are asked (not required) to bring non-perishable food items with them to the Concerts to be donated to veterans in need through Bridgeport’s Office of Veterans’ Affairs.

“The Marines of 2nd Marine Aircraft Wing Band are excited to share our music with the community of Bridgeport and to be a part of this fantastic event. Being able to be a part of the “Reunion” of Marine Bands and the community of Bridgeport is something truly special to us all. For many years, Bridgeport has extended its hand in hospitality and support for the Marines. We sincerely appreciate that support and are sure you will enjoy this year’s concert program!” Chief Warrant Officer 2 Jarrid T. S. Riggs, Officer In Charge, 2nd Marine Aircraft Wing Band.

A Marine Corps Band has performed in Bridgeport as part of the Columbus Day Celebration for 32 years, with two of those years by video. The Council dedicates the concerts each year to the memory of Vinny Vizzo, whose daughter Rose and Brother Eddie have been instrumental over the years in helping to make the Concerts possible.

Vinny Vizzo, an Army veteran who served during WWII in Africa, China, and India, was an active member of the Council and numerous other Italian-American organizations. For many years, he chaired Bridgeport’s Columbus Day Parade and, with current Council Treasurer Chris Caruso, he co-chaired the first Marine Corps Band performance at Captain’s Cove Marina in Bridgeport.

On March 3, 1988, Vizzo, 65, died of a heart attack after delivering an impassioned appeal to re-open the City’s Office of Veterans’ Affairs at a Bridgeport City Council public hearing. The Office was re-opened and has continued serving the city’s veterans ever since.

“The Marine Band Concerts are the most sought-after and popular traditions of the Columbus Celebration,” said Chris Caruso, Treasurer of the Council. “For 32 years, they’ve become an integral part of the Bridgeport community calendar, and this year marks the 33rd anniversary of the Concerts. The military precision, passion, skill and musical talent of the 50-plus Marines is quite an experience to see. Their variety of music is amazing. From jazz to patriotic favorites to popular tunes, you won’t leave disappointed. Don’t delay! First come, first served! Get your tickets while they last!”

The 2nd Marine Aircraft Wing was commissioned on July 19, 1941 at Naval Air Station San Diego, CA. At the outbreak of the Second World War, the Wing had squadrons based at San Diego, Hawaii, Wake Island, and on the Aircraft Carriers Lexington and Saratoga. Throughout the war, 2nd MAW participated in many of the major engagements in the Pacific Theater including Midway, Guadalcanal, Saipan, Tinian, Guam, and Okinawa. Since April of 1946, 2nd Marine Aircraft Wing has been located at Marine Corps Air Station Cherry Point, North Carolina.

Since 1941, 2nd Marine Aircraft Wing Band has supported the Wing by performing in over 50,000 events including both military and civilian ceremonies, formal concerts, community celebrations, parades, military Tattoos, festivals, and public relation tours. The band has received numerous certificates of commendation and unit citations from the Commandant of the Marine Corps, for excellence in its performance of duty.

Consisting of approximately 50 Marine Musicians, 2nd Marine Aircraft Wing Band is a highly trained and versatile musical organization. The band is capable of performing in a multitude of settings, from its primary mission as a Ceremonial Band to other ensembles such as; Concert Band, Rock Band, Jazz Combo, Brass Band and Woodwind Quintet.

Traveling extensively throughout the eastern United States, the band entertains millions of people in over 300 performances annually. Since November 10th, 1775, when the newly formed Continental Marines marched to fifes and drums, music has been an integral part of the United States Marine Corps. Today, 2nd Marine Aircraft Wing Band continues to carry on the proud legacy of musical excellence that is the hallmark of the Marine Music Program.

In addition to the two public concerts, the Marine Corps Band offers free performances and music clinics at local high schools, as well as perform in this year’s 114th Bridgeport Columbus Day Parade on Sunday at 11:00 a.m., from the intersection of Madison Avenue and Jewett Avenue, south on Madison Avenue to Micalizzi’s Italian Ices for the Columbus Street Festival.

While the public concerts are free, tickets are required. The public may pick up tickets at six locations this year. They are;

The concerts begin at 6:45 p.m. each evening, with doors opening at 5:30 p.m. Ample and free parking is available in the lot directly across from the Klein Memorial Auditorium.

Concertgoers are asked (not required) to bring non-perishable food items to the Concerts to be donated to veterans in need through Bridgeport’s Office of Veterans’ Affairs.

About the Council of Italian-American Societies of Greater Bridgeport:

The Council was officially formed on June 14, 1978 by John Arcudi, Mario Asdrubali, Dominic Cocco and George Puglisi. With the support of the Italian Community Center, the mission of the organization was to operate exclusively for charitable, literary and educational purposes with a strong emphasis on recognizing the contribution made to the United States of America by those who migrated here from Italy in the late 19th and early 20th centuries.

To achieve this goal, the Council continued the annual commemoration of Christopher Columbus which centered on Italian music, film, history and culture. In 1979, the Council became the official sponsor of the Columbus Day Parade and carried on the Bridgeport tradition which began in 1908. In ensuing years, additional events were added as part of a larger Columbus Celebration. One in particular, is our popular, much-sought-after and audience favorite, the annual Marine Corps Band Concert in loving memory of Vincent Vizzo, longtime Columbus Day Parade chairman and member of the Council. The Marine Band concerts have been held in his honor for 32 years.

A Special thank you to our community-wide dedicated, caring sponsors and volunteers for making each and every one of the events such a success. Without you, it would not be possible. It is your hard work that has made this year’s Columbus Celebration such a memorable event and an asset to the Greater Bridgeport community’s annual calendar of events.