City Council members are seeking a meeting with the city’s legal leadership to seek a court order compelling Mayor Joe Ganim to call a special meeting of the City Council on behalf of a legislative resolution directing the return of the Christopher Columbus statue to Seaside that the mayor removed citing public safety concerns.

The City Charter provides the mayor the authority to call a special meeting of the City Council. What if he refuses to do so? Council members assert a court action can make him do it. But who brings that action?

The next regular meeting of the legislative body is August 3. Why not deal with it then? Meanwhile, Ganim wants the Parks Commission to weigh in on the issue.

We, the undersigned, elected members of the City of Bridgeport City Council write this letter to formally request a meeting with you as city attorney and our legal counsel pursuant to the City’s charter provisions so that we may formally instruct you to immediately file a Motion for a Writ of Mandamus ordering mayor Joseph Ganim to hold a special meeting of the City Council for the purpose of adopting the attached Resolution and further ordering him to take such action as set forth therein.

As you are aware, we represent a super majority of the City Council and a majority of the residents of the city of Bridgeport. We are disappointed that the Mayor has unilaterally and arbitrarily refused to authorize a special meeting thereby necessitating this action on behalf of our numerous constituents have and are expressing disapproval of the Mayor’s summary abdication of the public trust by removing the Christopher Columbus statue from Seaside Park.

Therefore, we request a meeting and positive response from you within seven days or we will proceed accordingly on behalf of our constituents.

We do not take this action lightly and expect you to be fully prepared to follow through on our behalf as City Attorney to correct this egregious violation of the public trust. 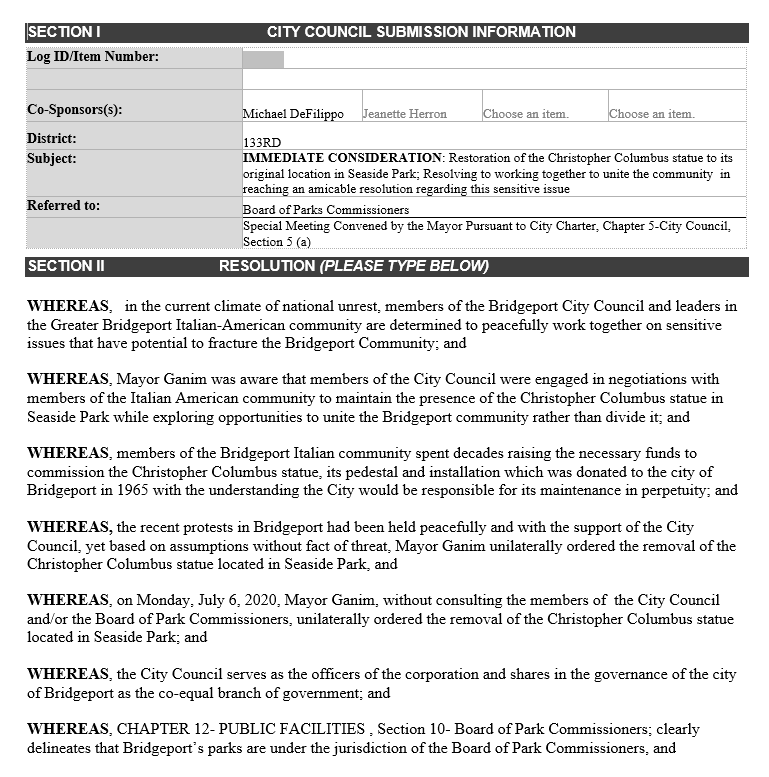