Harry Neigher was one of a kind–“Dutch Schultz has given the Bridgeport Police Department 24 hours to get out of town”–and as well, photographer Frank Gerratana, both of whom chronicled political and entertainment personalities for the Bridgeport Herald, later the Sunday Herald. Their work will be featured at an exhibit opening with a panel discussion September 17th from 6 to 8 p.m. at the Fairfield Museum, 370 Beach Road in Fairfield. Guess who’s on the panel? Numerous Gerratana photographs have graced OIB stories courtesy of the generosity of his son. Event details follow.

Vintage cartoons, photographs, and ephemera featuring Hollywood celebrities, political leaders, and Connecticut locales are part of the Fairfield Museum’s newest exhibit: Picturing The News: The Distinctive Vision of Harry Neigher and Frank Gerratana. The exhibition celebrates the history of the weekly Bridgeport Herald (later the Connecticut Sunday Herald) with a selection of Neigher and Gerratana’s work documenting the news from the 1930s to the early 1970s.

Columnist and cartoonist Harry Neigher was known throughout southern Connecticut for his entertaining column “Harry Neigher Covers the Nite Life,” which ran in the Herald from 1932 until the newspaper closed in 1973. Neigher’s friend and colleague Frank Gerratana was chief photographer for the Herald and created a remarkable body of work over roughly the same period, photographing every U.S. president from FDR to Nixon and documenting local politics and newsworthy events. Together, their photographs, cartoons, and sketches explore a range of local and national issues in entertainment, politics, and the arts over four decades. The exhibition opens on September 10th and closes on January 18, 2016. 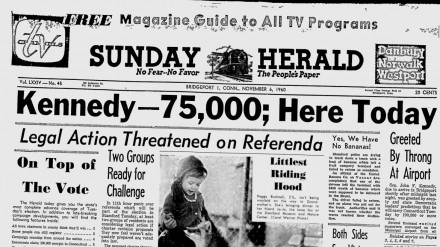 To highlight the opening of the exhibit, a special panel will be assembled on Thursday, September 17th from 6:00–8:00 p.m. at the Fairfield Museum. As part of the “Museum After Dark” series, the panel, “Remembering the Bridgeport Herald,” will feature journalists and media insiders as they look back on the history of the paper. Alan Neigher, son of Harry Neigher, and Frank Gerratana, Jr., son of Frank Gerratana, will be among the panelists. Additional panelists will include former Herald cartoonist and writer Rick Marschall, former editor and publisher of the Connecticut Post Bob Laska, former Herald and current Connecticut Post columnist Charlie Walsh, and Lennie Grimaldi, founder and editor of “Only in Bridgeport” web magazine.

A family activity day is also planned in conjunction with the exhibit. On Sunday, September 13th, from 2-3 p.m., Grandparents Day will take place. On that day, grandparents are encouraged to bring a grandchild to enjoy the galleries, hear storytelling and participate in a hands-on activity designing a newspaper inspired by the exhibition.

Media Sponsor for the Exhibit is TownVibe/Fairfield Magazine.

About the Fairfield Museum and History Center

The Fairfield Museum and History Center is a regional cultural arts and education center established in 2007 by the 103-year old Fairfield Historical Society. Located at 370 Beach Road in Fairfield, CT, the Museum is open seven days a week, 10 a.m.-4 p.m. Admission is $5 for adults; $3 for students and seniors. Members of the Museum and children under 5 years of age are free. For more information, call 203-259-1598 or visit Fairfieldhistory.org