Bridgeport resident David Walker, Republican candidate for governor, tweets that his campaign is on the way to qualifying for public financing which brings a jackpot of more than $1 million for a presumed 2018 August primary. In a needle from Trumbull First Selectman Tim Herbst who enjoys getting under Walker’s skin, the GOP gubernatorial candidate tweets back “One ‘qualifies’ when the SEEC says they qualify and check every contribution.” We are in the gamesmanship period of the 2018 race for governor where strength is built upon fundraising agility.

Talk to most Republican political operatives and they’ll say on the GOP side the top three candidates in the current field for party support are Herbst, Danbury Mayor Mark Boughton and Shelton Mayor Mark Lauretti. Walker has claimed if he qualifies for public financing he’ll be Connecticut’s next governor.

To qualify for public financing, gubernatorial campaigns must raise $250,000 in donations of $100 and less with the lion’s share coming from in-state contributions. The State Elections Enforcement Commission that supervises the Citizens Election Program examines finance reports to determine qualifying grants. It’s a dizzying process.

Herbst, Boughton and Lauretti all appear to be in the $200,000 range raised. Barring a gaffe they are all on track to reach the public grant threshold. Walker says he will get there. See his latest report here.

Walker and Herbst have engaged in a verbal give-and-take the past several months. In July the Herbst campaign filed an SEEC complaint against Walker asserting the former U.S. Comptroller General violated state campaign finance law by making representations of a declared candidacy for governor under the guise of an exploratory committee. The SEEC has rules against this. Walker denied the claim and filed a candidate committee shortly after. 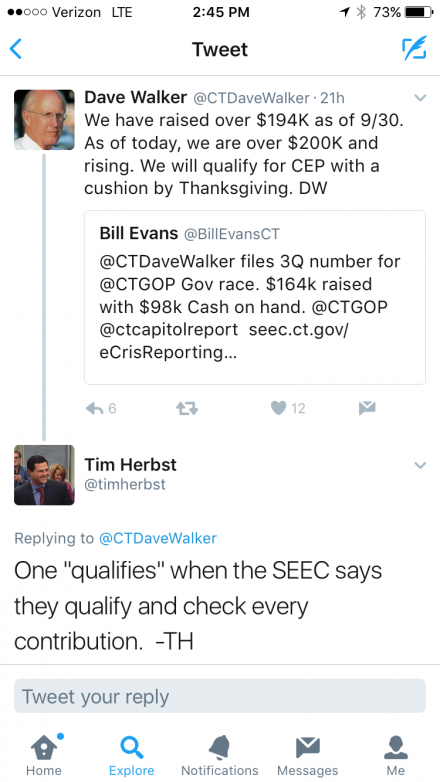 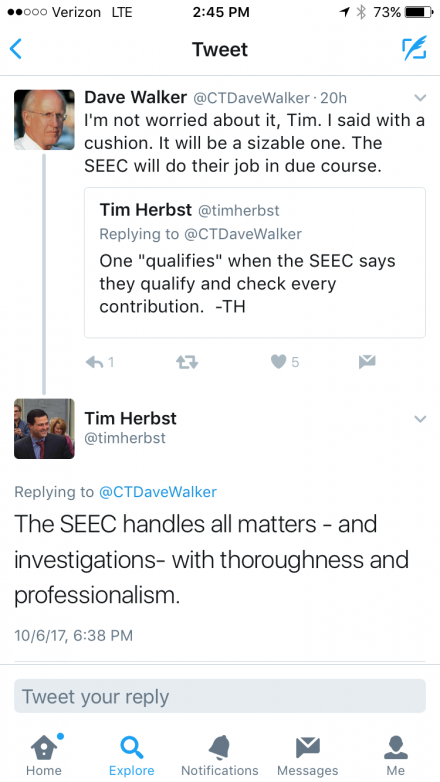