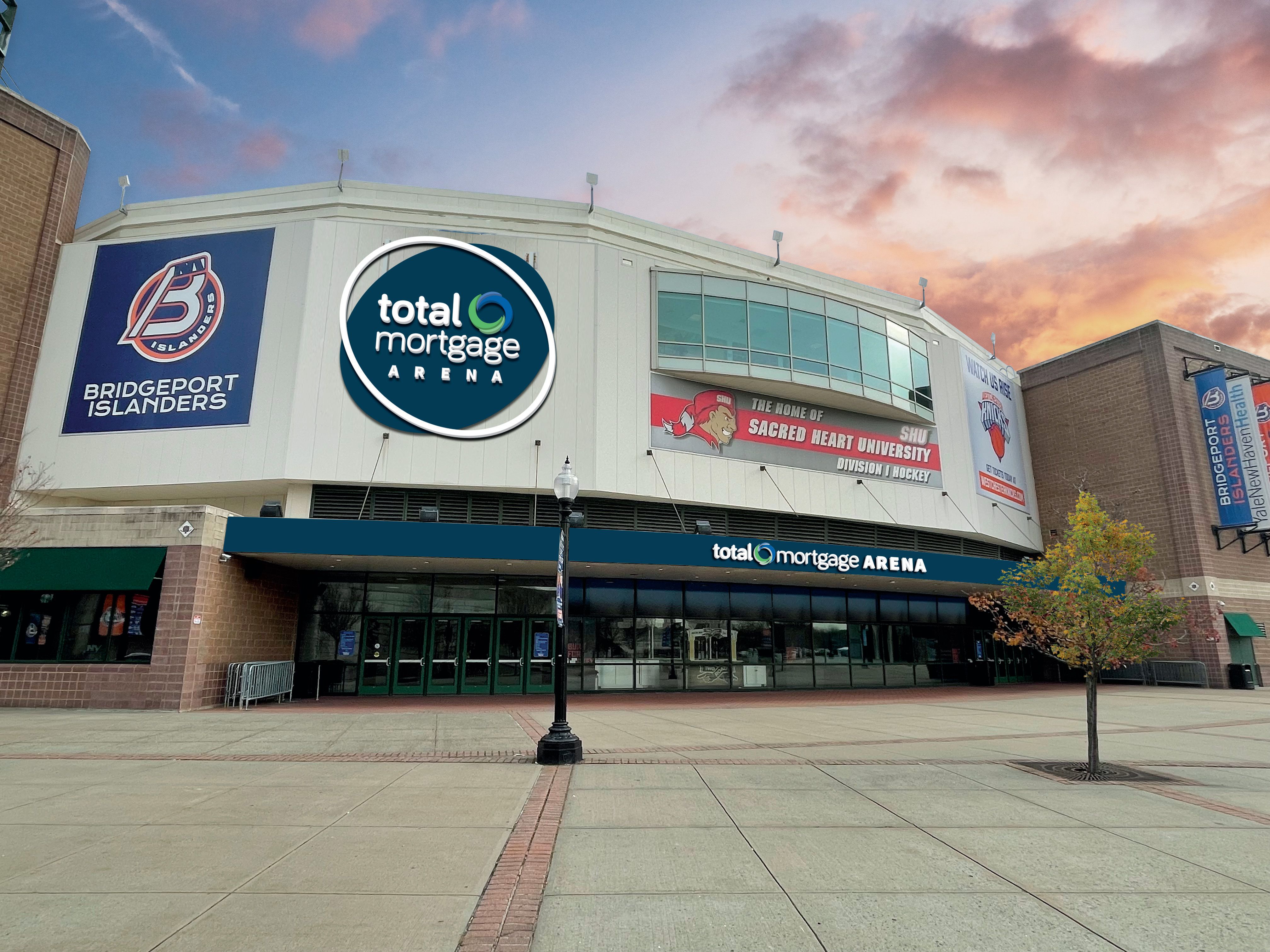 What was Webster Bank Arena is now Total Mortgage Arena.

According to Economic Development Director Tom Gill, the operating agreement in place between arena management and the city calls for an equal sharing on revenue generated from the naming rights in “excess of $2 million after deducting direct, out-of-pocket expenses, not to exceed 10% of the aggregate value of all Naming Rights Revenues, but in no event exceeding $500,000. The City will begin to share when the new contact is in place.”

News release below does not disclose value of naming rights.

The Bridgeport Islanders and Harbor Yard Sports and Entertainment announced today they have entered into a 10-year naming rights agreement with Milford-based regional home financing leader Total Mortgage. The deal will rename the 10,000-seat sports and entertainment venue in Bridgeport, CT, the home of the New York Islanders’ AHL affiliate, as Total Mortgage Arena.

“We’re excited to welcome Total Mortgage as our new naming rights partner in Bridgeport,” said Jon Ledecky, New York Islanders co-owner. “Total Mortgage is both a leader in the mortgage industry and a dedicated community partner, and we cannot wait to start working with their team and continue providing our fans with the premiere entertainment and experience they deserve.”

“This is a transformational partnership for Total Mortgage, and cements our dedication to both the Greater Bridgeport community and the State of Connecticut as a whole,” said John Walsh, Founder and Chairman of Total Mortgage. “The Bridgeport community has given us so much support over the past 25 years, and our partnership with OVG and the Islanders organization will open up even more ways for us to give back to the community that has served us so well.”

Headquartered in Milford, CT, Total Mortgage is a rapidly growing leader in the mortgage industry, and has ranked as the #1 purchase lender in Connecticut for two consecutive years, according to The Warren Group, an independent real estate and financial insights firm. Total Mortgage has been helping homeowners and home buyers get the financing they need for almost 25 years, and is consistently ranked among the top places to work in Connecticut. They take pride in building through the community and look to do exactly that through this partnership.

“I would like to welcome Total Mortgage and their entire team to the Arena and the City of Bridgeport as the newest member of our growing business community,” stated Mayor Joe Ganim. “This is a key partnership and sponsorship of a venue that brings thousands of visitors from the region to enjoy music performances and sporting events.  We are thrilled to join this exciting announcement that further signifies Bridgeport’s emergence as a premier entertainment hub in Connecticut.”

With a commitment from the City of Bridgeport to invest nearly $30 million in the arena, combined with additional investment from the Islanders, the arena will be restored to like-new condition. The Bridgeport Islanders, Harbor Yard Sports and Entertainment, and the City agreed to a 10-year extension of the venue operating agreement in August of 2021. Improvements will include upgrades to core building HVAC, electrical, and life-safety systems for elevated safety and comfort for arena patrons. In addition, locker rooms and artist dressing rooms are being refurbished to attract premier entertainment.

The transition to Total Mortgage Arena will begin immediately with all signage in place in time for the NCAA Women’s Basketball East Regional.

Please use this link for access to arena signage renderings & artwork.

About Total Mortgage
Total Mortgage Services, LLC is an industry-leading retail and direct-to-consumer mortgage lender headquartered in Milford, Connecticut. The company was included in Inc. Magazines’ list of America’s Fastest-Growing companies in 2010, 2011, 2012, and 2014, and ranked as the fastest growing lender in Massachusetts in 2019. Total Mortgage has been consistently voted a top workplace in Connecticut, and has been ranked as the #1 home purchase lender in Connecticut for two straight years. With over 35 branch locations throughout the eastern and central U.S. and over $7 billion in residential mortgage originations since 2019, Total Mortgage has established itself as one of the premier lenders in the northeast. They are currently licensed in 46 states and DC. NMLS #2764.

About OVG360
OVG360, a division of Oak View Group, is a full-service venue management and hospitality, company that helps client-partners reimagine the sports, live entertainment, and convention industries for the betterment of the venue, employees, artists, athletes, and surrounding communities. With a portfolio of more than 200 client-partners spanning arenas, stadiums, convention centers, performing arts centers, cultural institutions, and state fairs around the globe, OVG360 provides a set of services, resources and expertise designed to elevate every aspect of business that matters to venue operators. Service-oriented and driven by social responsibility, OVG360 helps facilities drive value through excellence and innovation in food services, global partnerships, booking and content development, sustainable operations, public health and public safety and more. For more information, visit OakViewGroup.com, and follow OVG on Facebook, Instagram, Twitter, and LinkedIn.