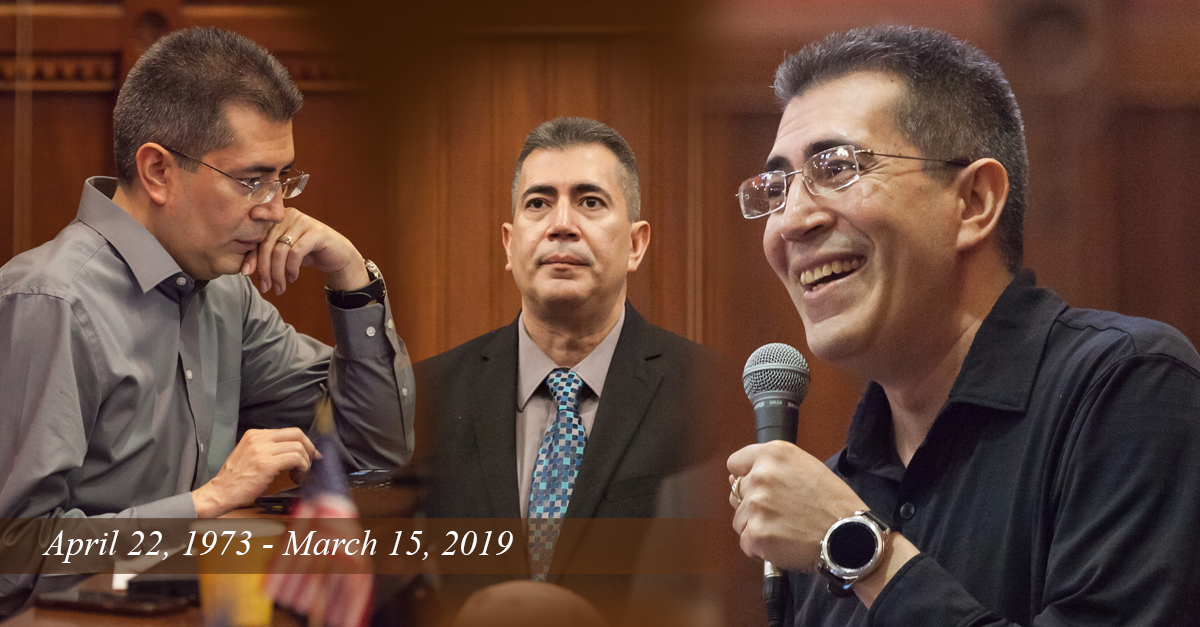 Ezequiel “Chequi” Santiago- age 45, beloved son of Americo Santiago and Evelyn Robles (Mitch Robles), passed away into the eternal, yet peaceful rest of the Lord on Friday, March 15, 2019 in Bridgeport Hospital, Bridgeport, CT; Chequi as his family and close friends graciously called him was born in Camden, New Jersey, then relocated with his family to the City of Bridgeport to South End.

Ezequiel had been elected to serve on the Bridgeport City Council before he was elected to represent the 130th District in the Connecticut House of Representatives. Following Dad’s footsteps, whom has retired some years prior, before relocating to Puerto Rico, Ezequiel had worked for some time on his father’s Campaigns where he educated himself on the ins and outs of politics. He was a subtle, yet assertive and quiet yet noted and clearly an influential voice for the people of Bridgeport who knew they could rely on Ezequiel to work for the betterment of Bridgeport; Don’t let his quiet demeanor allow you to doubt his abilities and effectiveness in progression towards the purposes he believe in. He was not one to seek attention, nor seek recognition, or media attention on things worked on or accomplished. Most recently, he, along with fellow representative Christopher Rosario had been on the forefront of the battle to win legislative approval for a Bridgeport Based Casino in the Bridgeport Harbor which was successful (in the State House).

He was a great team player and knew the key to success was to work as a team, because if everyone was on the same page, had the same agenda, the progress would be evident; He recently had been chosen by the Bridgeport delegation to lead the group for the current 2019 Legislative Session. He had also been elected as the chairman of the Banking Committee and sat on the Appropriations and Commerce committees. He was a strong Puerto Rican Leader who made the city proud to have him as part of the representation of the city up in Hartford cutting through all the negative, non complimentary labels placed by many, although didn’t stop him from solidifying relationships and amicably working with even those whom may not have the same agenda.

These qualities are what made Ezequiel stand out amongst being a “usual” yet being part of those “effective ones,” striving for what they believed would be best for the City He called home since childhood. His passing does not leave simply an empty chair in Hartford, yet leaves a serious void in the hearts and minds of many who he graciously heard and helped and worked with. Integrity wasn’t an option for Ezequiel, it was required and for how he was and how he did things, he has left a permanent mark in the hearts and minds of many who today shed tears and grieve because of the passing of this great man.

Besides his parents, Ezequiel is survived by his his Grandmothers Lydia Antonia Mercado and Olga Molina; one Brother Eddie Omar Santiago (Jodi Anastasia Santiago ); two sisters Michelle Robles (Jason Rivera) and April Robles; and Many other relatives and friends whom will miss him dearly.

Funeral Services will be held on Friday, March 22, 2019 beginning at 10:00 A.M. followed by a brief Service and then proceed for interment in Lakeview Cemetery, Bridgeport, CT;

Meanwhile please sign our online register book and memorial webpage as a place where you may share your thoughts, memories, prayers, pictures and so much more but is EXCLUSIVELY found at www.luzdepaz.com;

At the Family request, IN LIEU OF FLOWERS it is requested that memorial donations be made to the Bridgeport Caribe Youth Leaders, an organization He believed in and knew was working towards Promotion of children reaching higher goals in every part of their lives from sports to Education.  Therefore Memorial Donations may be made to  (Please check back for Instructions and/or exact information)