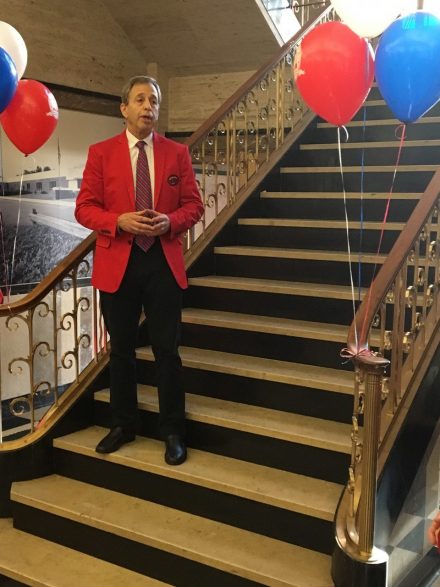 From the Barnum Festival:

Martin D. Schwartz of Fairfield, the retired President and CEO of The Kennedy Center and a long-time community leader and advocate, has been announced as the 71st Ringmaster of The Barnum Festival, one of the region’s best-loved annual traditions.

The kickoff event, Meet the Ringmaster Dinner, will take place on Tuesday, November 27 starting at 6 p.m. at Testo’s Restaurant, 1775 Madison Avenue, Bridgeport. The community will have the opportunity to greet and congratulate the new Ringmaster at this Pasta Dinner. As an added bonus, Ringmasters of the past forty years will be in attendance.

“We are happy to have Martin Schwartz as the 2019 Barnum Festival Ringmaster,” said Armando Goncalves, Market President of People’s United Bank and President of the Barnum Festival Board of Directors. “We are looking forward to building on this year’s theme ‘Everyone Counts,’ which aligns with PT Barnum’s legacy to bring fun and laughter to everyone. Under Marty’s leadership, this year we will have a great Barnum Festival. He will do a tremendous job representing all our communities.”

Schwartz retired from The Kennedy Center earlier this year. A champion for people with disabilities, he has touched the lives of thousands of families throughout Connecticut during his nearly 40 years as an executive and is nationally recognized in the rehabilitation field.

“As Ringmaster of the Barnum Festival, I have an opportunity to give back to the community in a big way,” said Schwartz. “I am truly honored to lead this major state festival and will be introducing new exciting events. In keeping with this year’s theme ‘Everyone Counts,’ we will be embracing and supporting people with disabilities and donating part of the proceeds to support special needs children.”

When Schwartz became the first President and CEO of The Kennedy Center in 1978, this small community-based rehabilitation organization was a grassroots non-profit founded in 1951 by its namesake Evelyn Kennedy and 12 parents. At the time, the agency served under 200 adults with intellectual disabilities, employed 48 staff, and operated with an annual budget of $776,000. Now headquartered in Trumbull, The Kennedy Center serves over 2,000 individuals annually from birth through their senior years with a variety of disabilities, employs over 750 staff, and operates with an annual $32 million budget. The agency is one of the largest employers in the region and one of the largest rehabilitation organizations in the State of Connecticut.

Throughout the decades, under Schwartz’s stewardship, one groundbreaking program after another was created providing greater opportunities for people with disabilities.

On the national level, Schwartz has been an accreditation surveyor from 1984 to the present for CARF, the international accreditation body for rehabilitation organizations. His commitment to excellence is unparalleled. Since 1981, The Kennedy Center has sought and consistently achieved the highest accreditation from CARF.

Still active in the community, Schwartz is a member of the Board of Directors Emeritus of the Trumbull Chamber of Commerce. He also holds two volunteer positions at Fairfield University: Advisory Board of the Graduate School of Education and Allied Professions, and Distinguished Visiting Professional.

Marty met his wife Elaine while they were both students at Syracuse University. They were longtime residents of Trumbull until recently moving to Fairfield. They have two married children and four grandchildren. In fact, when his daughter was in third grade, she was the proud representative for Tashua School in Trumbull for the Lavinia Warren Contest.

About the Barnum Festival
The Barnum Festival is a celebration of the City of Bridgeport and the surrounding area that was organized in 1948 to help support local businesses and honor P.T. Barnum–a world-renowned showman and city leader. The first Festival was held in 1949. The Barnum Festival events focus on building community spirit, fostering philanthropy, and celebrating the diverse cultures represented by residents. The festival culminates in a weekend-long Barnum Palooza that hosts parades, concerts, fireworks, and other family-friendly festivities. Visit barnumfestival.com for more information or call 203-367-8495 for tickets to the Pasta Dinner, which are $40 per person.