The Democratic Town Committee threw its first party fundraiser Thursday night two months after Mario Testa reclaimed the chairmanship and it appears Mario hasn’t lost a step in his ability to raise lots of moolah. When all is counted the Dems will be $20,000 richer.

Mayor Bill Finch, Attorney General Richard Blumenthal, Comptroller Nancy Wyman, and a collection of usual suspects, party regulars and candidates including congressional seeker Jim Himes and state senate hopeful Anthony Musto jammed Testo’s Restaurant. City Attorney Mark Anastasi was the master of ceremonies for the event that honored the late party chairman John Guman, a political mentor to many in the room. Guman’s wife Dottie is a vice chair of the party.

When I was a young reporter Guman was a hoot to cover. His cigars and rhetoric lit up a room. He helped a lot of people, but boy could he be a consummate ball breaker when you weren’t on his side. And for a Democrat, he was as conservative as they come. His loyalty to Catholicism made sure of that. Dottie Guman, the Mother Goose of the party, took Finch under her wing when Finch was trying to find his place in the party. John Guman never thought a whole lot about Finch. Those were the days when Finch was a liberal’s liberal. He’s changed a bit on some positions. But John Guman believed Finch was disconnected from party pragmatism and bloated with self interest. Guman was also staunchly pro life. So when Finch showed up at the Gumans’ door looking for Dottie, it was not uncommon for John to shout, “Dorothy, the baby killer is here.”

That was John’s way of saying, “You bother me kid.” Guman was also a master at creating chaos. During the 1989 Democratic Town Committee convention to endorse a mayoral candidate, Guman, as chair, ran the meeting. The party was split in all directions in part because Mayor Tom Bucci lost control of his budget, and also had supported Chris Caruso for party chair in 1986, throwing Guman under the bus, to make peace with (the late) Richard Pinto for Bucci’s failure to deliver the City Council presidency to Carsuo. Bucci went back to Guman for help when his relationship with Caruso blew up. Even though Caruso was party chair, he could never get over Bucci not delivering the council presidency. Anyhoo, Guman was back in as chairman, and lo and behold Mario Testa was fighting with (the late) Mike Rizzitelli over control of the 133rd District, as a result of the death of district leader Paul Macciocca.

Mario and Rizzy are yapping at each other. From the podium Guman leans into the microphone, “Mr. Rizzitelli, are you calling Mr. Testa a liar?” More words exchanged. Rizzy dares Mario to take the argument outside. Mario doesn’t back down. Okay, Mario says. let’s settle it outside. Boom. Rizzy sucker-punches Mario in the head. Mario fires back. They embrace in a contorted mess. Mario has a lock on Rizzy’s nose. Rizzy has his finger stuck in Mario’s eyes. Chaos breaks out. It was madness. The scene was captured on film by the indomitable Cecil Young. I was there, and I also have Cecil’s footage! Priceless. 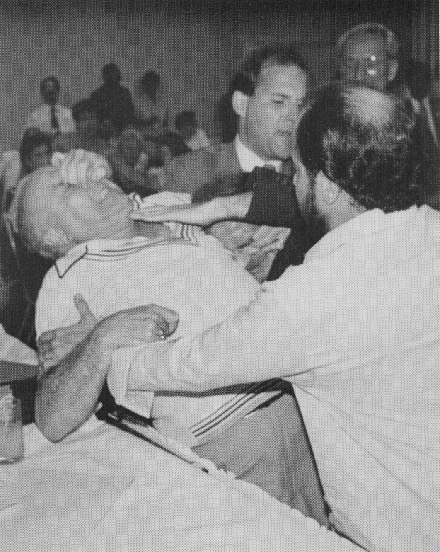 Anyway, thanks for the memories, John!

Hey, speaking of Caruso, this must have been a fun time! Finch and Caruso in the same room. See City Hall news release below:

May 22, 2008 – Mayor Bill Finch (D-Bridgeport) today was joined at the City Hall Annex by State Representative Christopher Caruso (D-Bridgeport) and local labor representatives in support of House Bill 5536, “An Act Establishing the Connecticut Healthcare Partnership.” The bill would allow municipalities, nonprofits and small businesses to voluntarily participate in the State employee health plan and could reduce costs to municipalities and increase benefits for employees of small businesses and nonprofit organizations. Governor M. Jodi Rell has recently threatened to veto this bill.

“This would be a giant step towards universal health care and we fully support it,” said Mayor Finch. “While the City of Bridgeport may not benefit directly, nonprofits and local small business could find it extremely beneficial.”

“Republicans purport to be champions of small businesses,” added Rep. Caruso. “By exercising her veto power on this bill, the Governor will put small businesses and their employees at a severe disadvantage. This is an opportunity to give people a choice, and it’s important particularly in cities in light of the onerous property tax system.”

Peter Thor, Director of Policy and Planning for AFSCME Council 4, said, “This bill is beneficial in numerous ways. Because the health care cost would be less expensive, small businesses and nonprofits would be able to retain and hire more employees. For municipalities, the bill could potentially save tax dollars for expensive health plans and alleviate pressures to reduce and cut community services. This bill should not be vetoed.”