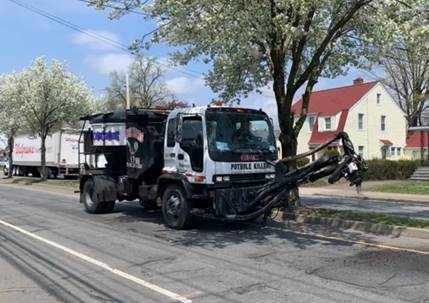 The City of Bridgeport Department of Public Facilities (DPF) announces that ‘The Pothole Killer’ has returned and has already begun repairing potholes in the Park City on main and highly traveled roads. The City of Bridgeport has leased the repair tool for two to three weeks which will allow for the DPF crew to fill each pothole in two minutes or less. Additionally, ‘The Pothole Killer’ results in a more permanent solution, lasting 3-5 years compared to temporary solutions such as cold patch repairs.

“Beware of those potholes–fill them and kill them. And let’s all do what we can to feel better, and better appreciate our environment here in the Park City,” stated Mayor Ganim.  “The administration is increasing cleaning and beautification, with that is visibility of more trees and flowers to beautify our Park City. I’m encouraging residents to make their voices be heard, and tell us where they would like to see flowers for the upcoming planting, visit BridgeportCT.gov/Bloom.”

In addition to repairing an inordinate number of potholes from harsh winters and occurrences on main roads with ‘The Pothole Killer,’ the Department of Public Facilities also owns equipment for pothole-patching on secondary roads, which includes:

The City of Bridgeport Department of Public Facilities responds to approximately 1000 pothole patching service requests per year. Bridgeport residents can report potholes to the Operations Division at 203 576-7124 from 7:00 a.m. to 3:30 p.m., Monday through Friday. Residents may also report a concern using the mobile reporting app SeeClickFix (available through the iTunes store or Google Play for Android).