After the charges, counter charges, letter war and turf protection, Mayor Bill Finch and Board of Education President Max Medina have reached common ground on the BOE easing the city’s deficit.

The mayor had requested $7 million or so, Max and company said way too much. The agreed upon figure is $2.5 million. Every little bit helps and the mayor needs all he can get to plug his fragile budget year that ends June 30 with the budget to follow just as shaky, depending on what the state legislature does in its special session to approve a budget.

The mayor and Max, neighbors on the East Side, have never been buds as evidenced in their recent flame-throwing letters, but as the clock ticks toward the end of the budget year it’s nice to see that they’ve come to some resolution publicly. (Now what they say privately are two different things.)

Max is filling out his final term on the BOE and he wants to go out knowing that he did his part in the city’s hour of need. For the mayor, he’s happy to be that much closer to closing out a deficit that the city had pegged at $20 million. Finch achieved major union concessions to bite deep into the deficit.

And as this budget year closes out the financial whiplash continues into the next cycle.

You Can’t Be Serious

Let’s see now, the city pays out nearly $3,000 for an outside lawyer (former State Representative Lee Samowitz) to handle a $50 tax collection. Brilliant. Outstanding. An OIB classic. That’s like the IRS seizing a bank account for a penny owed.

How many other cases like this are out there? An excerpt from Dan Tepfer of the Connecticut Post.

BRIDGEPORT – Ever since he came to this country from Haiti Jean Castro just wanted to live the American dream.

He worked as a mechanic in Stamford before finally saving enough money to buy a house here for himself, his wife and three children.

Now, three years later the city is foreclosing on the single-family home on Harral Avenue because Castro owes $51.69 in back taxes.

“It’s unbelievable,” exclaimed the 49-year-old Castro as he stood beneath the large grape arbor alongside his home. “I pay my mortgage every month, I do everything I’m supposed to do and now you tell me the city is taking my home. “I’m shocked.”

Last week a Superior Court judge granted the city’s foreclosure action and ordered the home to be sold in December to satisfy the back taxes as well as the $2,705 in attorneys fees and foreclosure costs.

According to court records, Castro did not appear to contest the action.

But Castro maintains he didn’t know his house was in foreclosure. He said he received a letter from the city stating he had back taxes and he turned the letter over to his mortgage company which pays his taxes.

“The bank said it was going to take care of the back taxes and that’s the last I knew of it,” he said.

In fact court records show that nearly $3,000 in back taxes were paid on the house leaving a balance of $51.69.

“Now they are using the money I paid in taxes to attack me,” Castro complained.

Know what I say? Let the guy keep his house.

My new best friend is Sarah Palin. I take back everything I’ve ever written about the Snow Queen, Ice Lady, Polar Palin. Why? Okay, here’s the deal. The latest episode of Soap Sarah involves her allegedly lifting language for a recent speech from Newt Gingrich, one of her rivals for the GOP presidential nomination in 2012.

This alleged indiscretion infused OIB with more than 500 additional direct referral hits on Monday. What the hell is that? Well, the intrigue with Sarah’s speeches means that if you typed in “Sarah Palin speech” or “Sarah Palin photos” on Google it led curiosity seekers to OIB simply because of a few posts I wrote following her GOP convention speech last summer.

I’ve examined the evidence and Sarah gave proper attribution to Fig Newt. No harm, no foul. So, thank you Sarah, I’m now firmly in your corner with unimpeachable commitment. Just in case anyone’s forgotten, remember these? 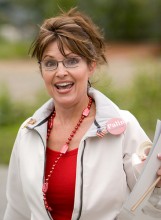