Update: In response to M&T Bank hurting Bridgeport people financially, Mayor Joe Ganim announced on Tuesday he will respond in kind, pulling $30 million in accounts from People’s United Bank following disclosure by its buyer it will cut 661 jobs in Connecticut’s largest city.

People’s United depository relationships with the city include a capital account and tax collections account that drives millions to the bank.

“We are taking out money because we don’t trust them and they have not shown themselves to be responsible,” Ganim told Hearst Connecticut Media. “We met with them when the merger was first announced and they did not leave us with the impression that anything like this would happen. This is going to have a huge impact on our community and it makes no sense.”

Ganim added: “People’s Bank has been invisible for decades in this community and it sounds like we’re going to get more of the same from M&T.”

Original story: Mayor Joe Ganim is now weighing in on the purging of more than 600 Bridgeport jobs at city institution People’s United Bank absorbed in a $7.6 billion purchase by M&T Bank that is awaiting final regulatory approval in October.

In a letter to Connecticut Attorney General William Tong, Ganim urges state support to pressure M&T officials who misrepresented their jobs commitment when the merger was announced in February. That’s a major shift from the bank’s corporate cry: “We Understand What’s Important.”

Ganim declares if the bank doesn’t make good on promises, he will reevaluate the city’s financial relationship with the banks. 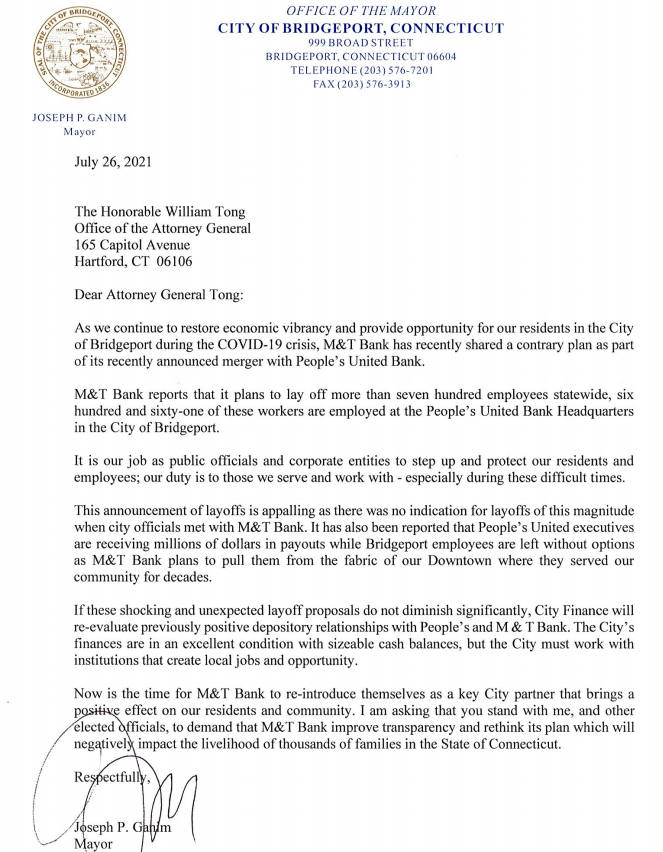