Can you provide a city response to Rep. Rosario’s comments?

Yes. The Mayor met with Representative Rosario this afternoon along with Chief Perez and Captain Blackwell. They all discussed the incident and what they felt could have been handled more appropriately or correctly by the officer. Please see the attached video as they provided their own statements.

Also, can you say why the officer was checking license plates in a funeral home parking lot?

The officer ran the plate on the street prior to Representative Rosario pulling into the parking lot.

The officer received info on the plate run while he was in the parking lot.

Was license plate scanning/reading equipment used (like the ones mounted to patrol cars)?

The plate was entered into a system called ‘COLLECT’. The Plate 128 was in fact reported stolen.

I heard about the traffic stop involving the State Representative in Bridgeport on the C-shift. I called Meriden and inquired about this plate in question. Meriden informed me the plate was stolen on 2-27-15 from 1400 Old North Road in their town. (Case #2015-001454). The plate was registered to a “Larosa Construction” and was on a Green Dodge 2500 Pick-up truck. Originally Meriden had no information about the type of plate after looking through their files. I called back and asked Meriden for the vin of the vehicle which they provided. After running the VIN in NCIC the plate shows that it is a combination plate. I called Meriden back and informed them and asked if they could modify their entry so this encounter doesn’t happen to the Representative again.

Did the officers find there was a mistake that identified Rep. Rosario’s license plates as being reported stolen?

Yes. See above statement as provided by Dispatch. 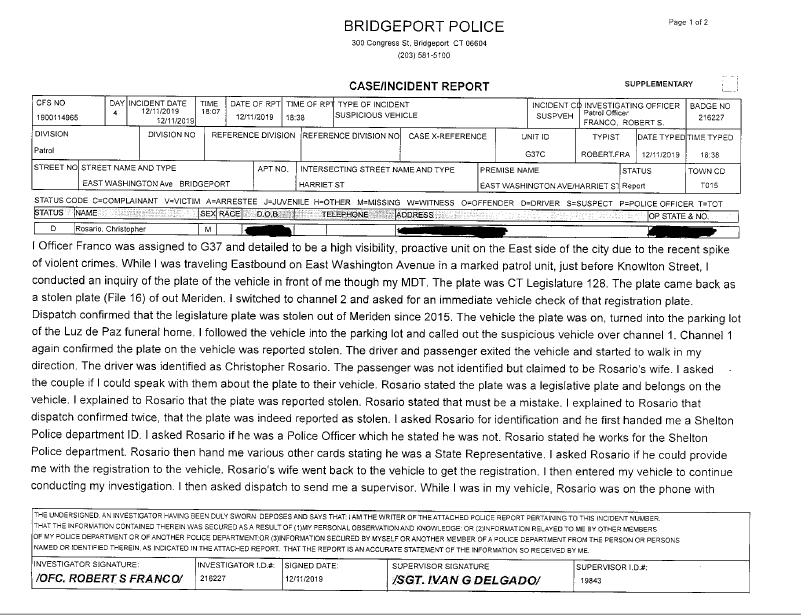