Lord & Taylor! Board of Education member Chris Taylor rarely disappoints when it comes to controversy.

For more than a year the State Elections Enforcement Commission investigated a complaint brought by former school board member Maria Pereira that Taylor violated state law when he was elected as a Republican to the Board of Education while residing in Fairfield for years. He was voting in Bridgeport but living in Fairfield.

On Wednesday the commission voted unanimously to accept a consent agreement by both parties, that includes a $750 fine, to bring resolution to the matter. Except Taylor and his lawyer Mark Balaban claim they agreed to nothing. Read seectaylordecision

“I did not enter into any consent agreement,” Taylor told OIB Wednesday night by phone. “My lawyer didn’t either. It’s all BS.”

Taylor added that discussions did take place about a resolution but they “were all crazy” offers by the state.

Late Wednesday afternoon, as provided by Taylor, Ahern sent this email to Balaban:

Mark,
The Commission voted today to formally accept our agreement by a vote of 4-0 as a final resolution of File No. 2019-038, which includes the UAPA hearing pending before hearing officer Andrew Cascudo. Attached is the agreement signed by General Counsel Michael Brandi and ratified by Vice-Chair Salvatore Bramante.

While it is only a formality, I would appreciate it if you would please have your client sign this agreement, or, as discussed, you may sign it on his behalf as his attorney of record.

As stated in the agreement, upon compliance of your client with the order, including payment of the agreed upon civil penalty, the file will be closed and the Commission shall not initiate any further proceedings pertaining to the question of Mr. Taylor’s bona fide residence for voting purposes in Bridgeport on the facts and evidence presented in the Complaint.

I look forward to working with you in the future.

P.S. By way of a heads up, we have already had several press inquiries for this agreement. Now that the matter is resolved, the non-exempted items in the file—including but not limited to the agreement—will be subject to FOIA.

My client NEVER agreed to any of the proposals. I have been waiting for return calls for over two months.

The SEEC has civil authority over elections complaints. From the ruling: 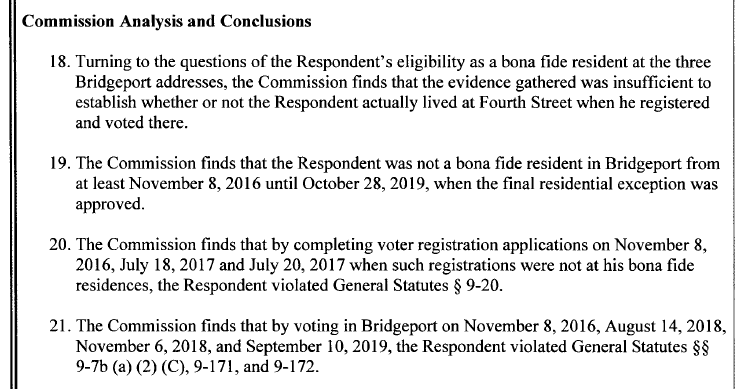