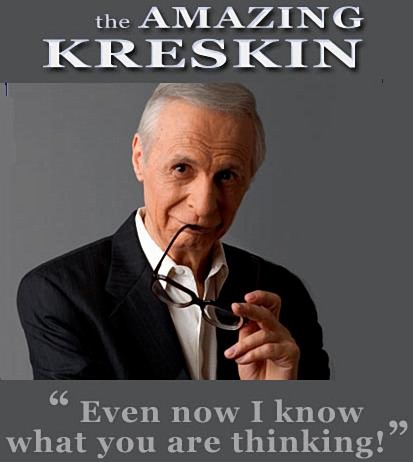 What? You’ve never seen the Amazing Kreskin live? Well, here’s your chance. The Amazin’ one, the most famous mentalist on the planet, will appear at the Downtown Cabaret Theatre on Feb. 18 and 19. We’re hoping Kreskin will make the city and state budget deficits disappear. Check out the special offer.

The genial Executive Director of the DCT Hugh Hallinan has a special offer for OIB readers for the Sunday Feb. 19 show, a 25 percent discount on tickets. There’s two ways you can access the discount. Simply go to the cabaret website dtcab.com and click “tickets”–that will bring you to the calendar. Click Amazing Kreskin 5 p.m. Click Get Tickets. Click number of tickets and venue seating location. Click Get Tickets. The face value of the tickets will appear. Click continue. Fill in delivery method and then enter the following code: akfeb19oib. Click Apply Code. Your discount will appear. If you’re not already a registered user of the website you will be required to sign up. You can also order tickets and receive the discount by calling the DCT at 203-576-1636 and enter option 0. Provide the box office the code akfeb19oib. Okay, now order your tickets. If you encounter logistic issues with any of this contact me at lenniegrimaldi@onlyinbridgeport.com and we’ll make it right. See Kreskin’s bio below:

With a showman’s flair, a comedian’s wit, and the capacities of a bona fide Mentalist or thought reader, The Amazing Kreskin has, for some six decades, dramatized the unique facets of the human mind … his own. His very name has become an integral part of pop culture throughout the world, invoked in comedy clubs, comic strips, print stories, and TV shows from sitcoms on through national magazines.

Born in Montclair, New Jersey, it was during the childhood game “hot and cold” that Kreskin’s remarkable ability to find hidden objects emerged. His ability to read thoughts expanded, and by his teens he also became nationally recognized in the United States as “The World’s Youngest Hypnotist,” resulting in his collaborating in psychological clinical studies extending into the realm of Parapsychology and the Power of Suggestion. By his late teens, this icon of thought transference developed a mental test that has become the highlight of his performances all over the world. This signature piece has Kreskin requesting that his check be hidden somewhere within the venue he is appearing. If he fails to find it, he will forfeit his fee.

Through the decades, audiences of all ages have been drawn to this legendary figure. How many other celebrities can boast their own television series, their own board game, over some sixteen books, their own theme song arranged by the renowned Skitch Henderson at Carnegie Hall, let alone hundreds of appearances on almost every talk/variety show to be had. His performances have been seen all over the world, and he has flown over 3 million miles.

The Amazing Kreskin has also become a training consultant to law enforcement and security personnel throughout the western world in the development in their own powers of observation and intuitive skills. Kreskin continues to offer “$50,000 to anybody that can prove that he employs paid secret assistants or confederates in any phase of his program.” It is an offer that he has held for many, many years.

Finally, through the years, Kreskin has received international recognition for extraordinary predictions often dealing with world affairs. Regarding the US Presidential Election in 2008, he logged the results with a written statement made 11 months earlier, on December 6, 2007. In the year 2008 on FOX Business News, he predicted the results of the Super Bowl three days before the game.

A few years earlier in Canada, one month before a national election, he predicted the re-election of Prime Minister Martin, and named the exact amount of seats he would carry. On the day after the election, on National Canadian Television, he reflected that the government could collapse in 14 months. He was off by 5 days. He has been called by many the Nostradamus of the twentieth century.

Beginning in Canada, Bravo will initiate a new television series called Star Portraits, in which the entire program will be devoted to a high profile celebrity who has agreed to allow a trio of outstanding Canadian artists to each do a portrait of a celebrity which, when the celebrity is brought back weeks later, will climax the show. The decision was made that to launch the series would be The Amazing Kreskin.