Before Black Rock became part of Bridgeport, the Town of Fairfield claimed it. From the Fairfield Museum & History Center:

A large mural painted by a renowned local artist in the 1940s, and which was on display in a Black Rock bank for nearly 70 years, has been preserved by the Fairfield Museum & History Center in partnership with the Black Rock Community Council. The mural of “Old Black Rock Harbor About 1810” was commissioned by the Black Rock Bank & Trust Company in the mid-1940s and remained on display there until this year, when it was removed prior to the building undergoing a complete renovation. 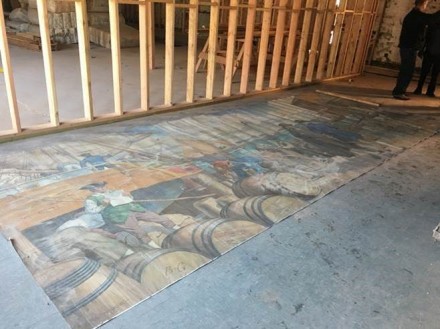 “Through the generosity of the building’s new owner Tom Quinn, this important part of Black Rock’s artistic history has been donated to the Fairfield Museum and will be preserved for future generations,” noted Fairfield Museum executive director Michael Jehle.

Artist Robert Lambdin (1886-1981) of Westport was hired to design and paint the mural for the bank, which was located at the corner of Fairfield Avenue and Brewster Street. He spent two months researching the area at the Fairfield Historical Society and then three months working on the piece. It depicts Black Rock Harbor as he envisioned it in the early 1800s, with a ship unloading its cargo onto the docks, with a warehouse nearby, and Black Rock lighthouse in the background. The mural was completed in 1948 and presented at an open house where the bank encouraged the public to come and view the new 8′ by 20′ scene.

During the Great Depression of the 1930s, Lambdin won several New Deal commissions through Works Progress Administration projects to depict American life in public buildings such as libraries, schools and post offices. Some examples of Lambdin’s WPA wall art have been preserved in Westport, and the Fairfield Museum’s swift action in saving this mural will ensure that it can be viewed and appreciated in the future.

Fairfield Museum Library Director Elizabeth Rose emphasized the importance of the mural and its preservation. “The mural,” she said, “helps us to imagine what the Black Rock port looked like when it was the center of economic life, with ships carrying the products of Fairfield’s farms to cities along the east coast as well as to the West Indies.”

The “Old Black Rock Harbor” mural suffered some damage over the years when the bank building was vacant, and the Fairfield Museum is seeking donors to assist in its restoration, the cost of which is estimated to be $25-30,000. An initial condition survey of the mural has been completed through the generosity of Bruce Hubler.

About the Fairfield Museum and History Center

The Fairfield Museum is a dynamic non-profit museum, library, cultural arts and educational organization founded in 1903 that provides families in Fairfield County and beyond with a wide array of exhibits and educational programs that teach regional history, celebrate a shared heritage, and prepare students and adults to be more active participants in their community to plan for a better future. The Fairfield Museum is an independent non-profit organization that relies on funding from individuals, corporations and foundations. The Museum is especially grateful for leadership support from the State of Connecticut, Town of Fairfield and Fairfield County’s Community Foundation.